Well, we’ve been getting some appreciable snow fall the last couple weeks. Here in Germany, when that happens, there are snow-clearing requirements, should you happen to have a public or private sidewalk/driveway on your property. In Germany, it’s your responsibility whether you’re the homeowner or the renter; if you’re living there, it’s your job.

These responsibilities aren’t just a nice thing to do or a social expectation, it’s German law. If an accumulation of snow could cause normal people, taking regular precautions to slip and fall then it must be removed. During a period of day-long snow, it’s expected that snow removal is an on-going job which may require sidewalks and driveways to be shoveled repeatedly during the day. The generally accepted hours when you're expected to keep your walkways clear are 0600-2200 (6AM-10PM). Just because you happen to be at work, it’s not OK to allow your sidewalks to accumulate snow that could become a hazard. I’m not sure what you’re supposed to do in that case other than go home during the day to shovel or arrange for someone else to do it.

Jeff out shoveling the snow before going to "work." Interesting mixture of clothes here. The jacket was issued by the Air Force to Jeff at K.I. Sawyer AFB, Michigan in 1976. The boots and gloves were issued at Eielson AFB, Alaska in 1996. Don't have much use for these in Texas. 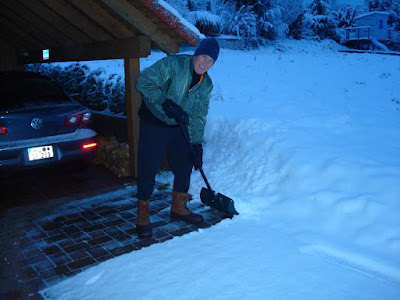 In most German cities, towns and villages, only the main roads are plowed. From what we can tell, neighborhood streets do not qualify as a main road. If you don’t live on a main road, then in addition to being responsible to clear your own driveway and sidewalks, you are also responsible for half the street in front of your home.

If someone slips and falls on your walkways or driveway and is injured you’re liable. If you hadn’t cleared the snow, you’re in trouble. Obviously, some liability insurance is advisable. Germans are people that like to get out and walk, early morning or during the evening hours; they like to get out and about. So keeping walkways clear throughout the hours mentioned is no-kidding a good idea. If you don’t, at the very least you’re going to get the evil eye from the exasperated Germans. At worse, you might get somebody else’s medical bill.

When we did a Pros and Cons list about moving to Germany I don't think this made the Pros list. 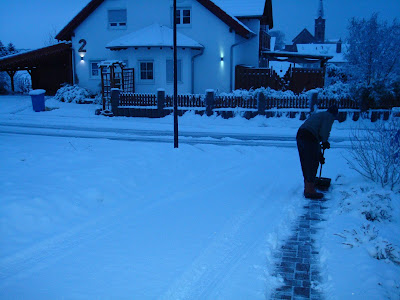