It's officially the first day of winter. We've had some serious snow here the last few days. Big fat flakes and lots of it. Most of the airports here in Germany, and many around Europe, have been greatly affected. Here's what the German Wintermärchenland (winter wonderland) looks like in Weilerbach.

A nice view of the snowfall out our second floor window. This is where Jeff and I sit when we sit at our computers.

Jeff and I walked up the hill behind our house. Here's a picture of Jeff in the same place I took a picture of him last summer, kind of an interesting contrast. 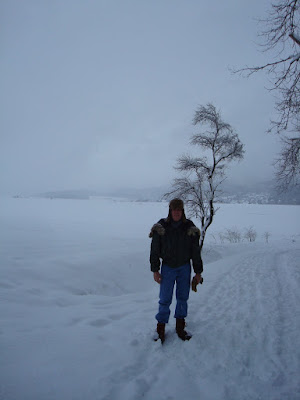 From the top of the same hill looking back down to Weilerbach. 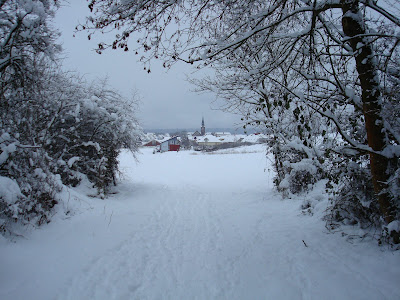 When we got back to our house we were a little warm so jeff said we needed a refreshing winter beer. Our patio was the perfect place for a Schwaben Brau Marzen. 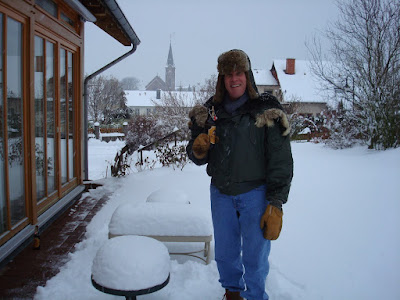 From our second floor window we watched this old guy drag this big Christmas tree up the hill to the intersection below our house. Guess he got tired because these two other guys and their car showed up to help.

We live at an intersection about a third of the way up a relatively steep hill. What makes it difficult to get up our street after a good snow is that at the bottom of our hill you have to make a ninety degree turn to start up the hill. So, you can't carry any momentum into the turn and up the hill. You might say, "Big deal, I live on a hill too and don't have any problem in the winter." What you have to remember is that the street up this hill and all the streets around us are not plowed, ever. It's interesting to watch from our window. One car trying to get up the hill when another turns the corner to go down. Then another shows up at the bottom hoping to have a little momentum to make it up the hill only to see two obstacles in front of him. Here's an example of the mess that can occur right outside our window. It happens every day when it snows.

Sounds like there's more on the way before, and during the Christmas weekend. Hope you all have a white Christams, unless you're in Florida or some other place where snowfall causes total chaos.
Posted by Sandy and Jeff at Wednesday, December 22, 2010