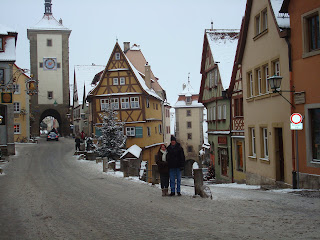 Our daughter Megan and her husband Will arrived here in Germany, December 2, my birthday, for a holiday visit. Having our daughter with us on my birthday was, of course, a wonderful gift and blessing. The day after their arrival, Jeff and I, took them on a long weekend excursion of Germany. Friday we drove to Rothenberg ob der Tauber, the beautiful walled city in northern Bavaria. (Jeff and I are here in Rothenberg at the most photographed intersection in all of Germany.) Saturday we continued on to Munich with a stop in Dachau so that Megan and Will could do a tour of the Concentration Camp Memorial there. Once in Munich, hotel was just a very short walk to the Marienplatz so we walked through the Christkindlmarkt there and then spent a way-fun evening in the Hofbrauhaus. Even ran into some Texas neighbors there.

Munich actually has around twenty different Christmas markets with varying themes, so Sunday we had a plan to experience six of them. First, we stopped again at the city's main Christmas market that takes place in the Marienplatz, wraps around the Rathaus and extends down along the shopping street past the Frauenkirche. Of course, while there we had to watch the Glockenspiel performance at 1100. Then we walked just a few blocks to the Rindermarkt where they have another Christmas market. Most of the vendors there sell items that allow you to build your own Nativity scene. Everything from a little baby Jesus, to all the animals, the wise men, everything you can possibly imagine. On the way to the Sendlinger Tor, one of the old gates to the city, we stopped at the Hackerhaus for a nice Hacker-Pschorr Spezial Helles, yes, beer. Then, at the Sendlinger Tor, another pretty but standard Christmas market. From there, just a few blocks to the Pink Christmas Market; a gay Christmas market. When I say gay, I'm talking about the sexual-context kind of gay, not the gee-I'm-happy kind of gay. There really wasn't much to the Pink Christmas Market, about ten tent vendors, nothing overtly gay but maybe I just don't know the signs and signals. Then back to Sendlinger Tor to hop on the U-bahn.

The U-bahn took us up to the west side of the English Garden where we got off and then walked into the park and the Christkindlmarkt at the Chinesicher Turm. Given the location and the manageable crowd this was the best market of the day. The fresh snow, the vendors wrapped around the Chinese Tower made for a beautiful winter setting. Since we were bundled up and the temperatures weren't too cold, it was even a nice place to have a bratwurst and beer outside. The walk into and out of the English Garden was absolutely a winter wonderland.

We got back on the U-bahn to go out to the Theresienwiese, the Oktoberfest grounds, where they hold a Christmas market with an international theme. We went out here because we wanted to see the Oktoberfest grounds. The festival here was pretty much a disappointment. Although quite large for a Christmas market it was a very crowded, shoulder-to-shoulder kind of crowd. It was indeed international. Vendors selling items and foods from all over the world. We walked through once and left.

The next day, Monday, we drove to near the Austrian border to do a tour of Neuschwanstein castle. The weather had changed and, although it was a bit rainy, Neuschwanstein is always an impressive sight. The last time we took Megan to the castle she was just six months old and we carried her in her stroller up through the forest path to Neuschwanstein. Now here we were with her and her husband. After the tour we drove to Kloster Andechs for an evening meal there and some Doppelbock Dunkel. We spent the night in a wonderful hotel right there in Andechs.

The five hour drive home on Tuesday was a bit long but it was fun to be with Megan and Will.

Here's some pictures of our trip.

Rothenberg Christkindlmarkt in the city square. Megan and Will over looking the Tauber river. Part of the city wall in the background. 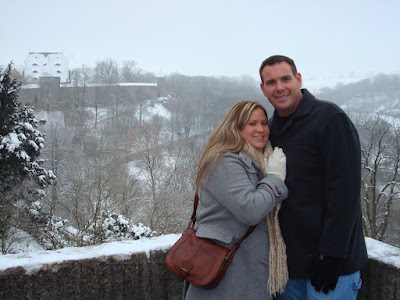 The Rothenberg Christkindlmarkt took place up and down streets, in various town squares and even in the alleys. 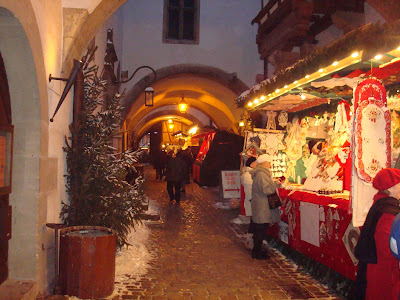 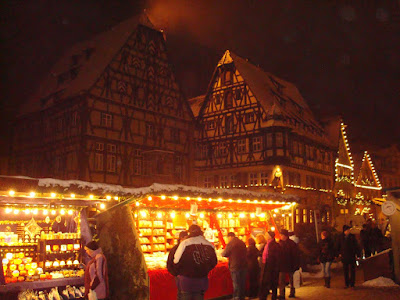 Jeff is always amazed how restaurants fold their napkings so that he can wear them as a little hat. Here's the king and queen of Bavaria. 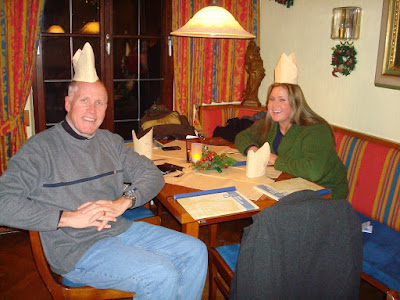 Rothenberg is one beautiful sight after another. One of the many towers on our walk back to our hotel. 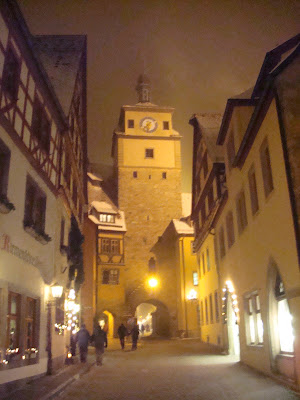 Since Jeff and I had been to the Concentration Camp Memorial in Dachau five times we went to the city Christmas market while Megan and Will toured the memorial. 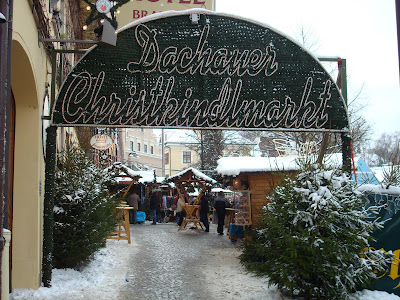 Another nice way to pass the time while we waited for Megan and Will. 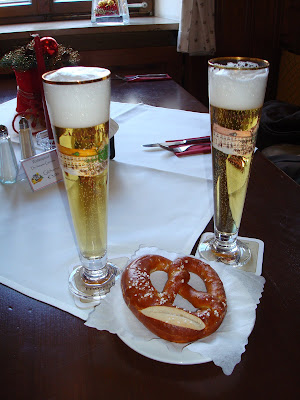 One of the Munich Christkindlmarkt greetings. Jeff, me and Megan. 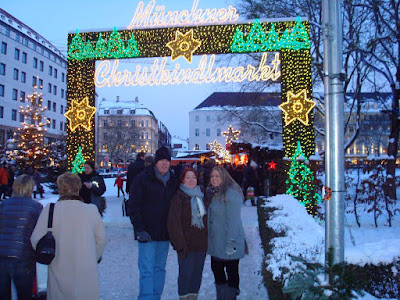 The Marienplatz with the Rathaus tower and Glockenspiel. 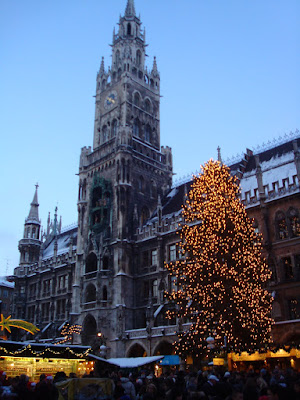 A pretty Gluwein vendor with miniture Frauenkirche towers, right in front of the real Frauenkirche. 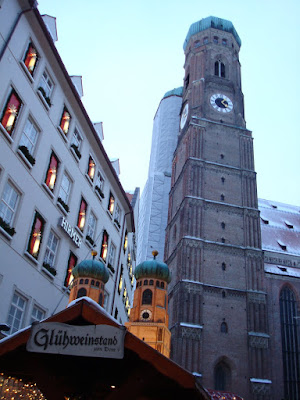 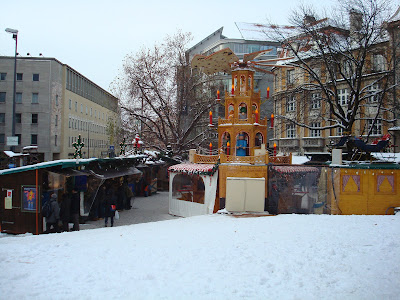 Sendlinger Tor, one of the old gates to medievel Munich. 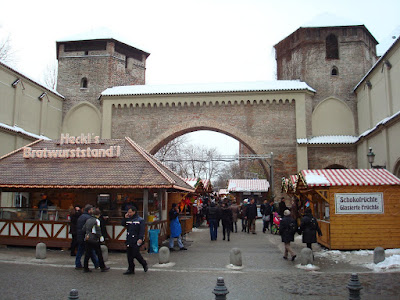 The Pink Christmas Market. Take a look at the gingerbread cookie around my neck. It's a gay cookie. Megan got it for a friend of hers. 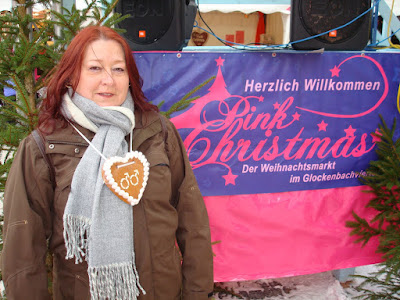 The Chinesicher Turm in the English Garden. This was our favorite market by far of the six we visited in Munich. The whole setting was beautiful. 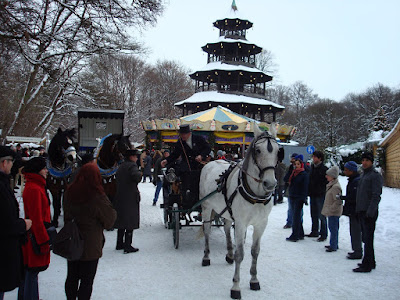 It was cold but we were bundled up enough to enjoy a beer, brat and pommes frites outside. Had to eat the food fast before it got cold. Maybe the first time ever that we drank a beer that got colder as we drank it. 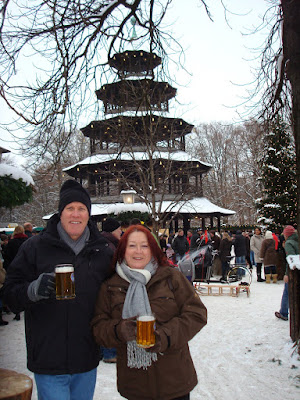 The entire English Garden was magnificent. It was great fun watching the kids sledding. 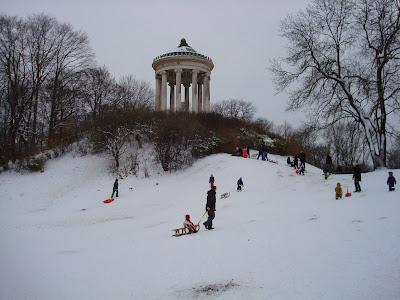 The International Christmas Market on the Oktoberfest grounds was really a mad house. This picture is looking northwest and we are standing in the middle of what would be the arcade and carnival ride area during an actual Oktoberfest. The tents here are a fraction of the size of a big Oktoberfest beer tent. 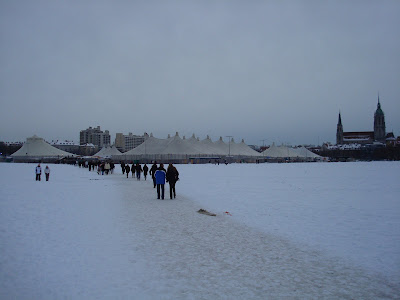 If you've been to Oktoberfest you'll recognize the Bavaria statue. 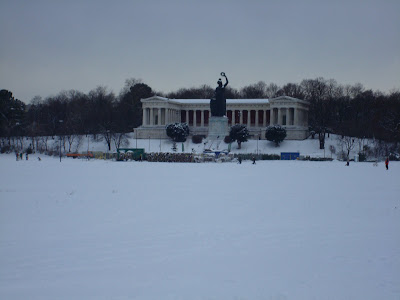 We happened to be in Munich on St. Nicholas night, December 5. Here's St. Nicholas at the Chinesicher Turm. Children in Germany put their shoes outside their front door on December 5. If they were good during the year, St. Nicholas fills their shoes with candy. I started this with Megan 23 years ago when we first lived here in Germany and kept it up even after she got married. I drove over to her house to fill her shoes. Even did it at our hotel that night. 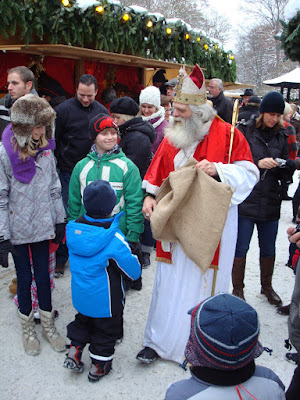 St. Nicholas is sometimes accompanied by Knecht Ruprecht (Servent Ruprecht) who takes care of the bad kids. He puts tree branches in the shoes of those children. You can see the branches here in his back pocket. You can also see the whip that he might use to spank bad children. For some children, the appearance of St. Nicholas brings fear and foreboding since Knecht Ruprecht may be nearby. This Knecht Ruprecht and three others were terrorizing the crowds around the Marienplatz. 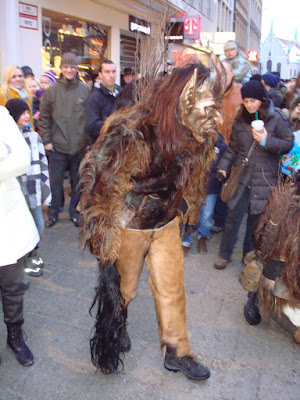 Always an amazing sight. We walked up and did the tour which was really incredible. 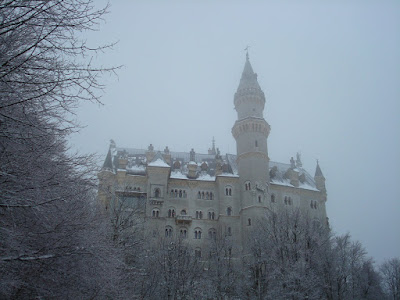 Since the last time we were here 26 years ago, they had build this observation deck. Very nice, unless standing on an open metal grid with a hundred feet of nothing below you gives you the creeps. I didn't go out there. 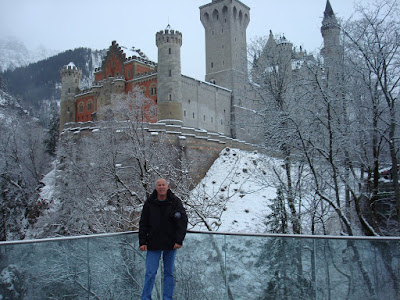 Kloster Andechs is much more than a great brewery. Inside the church is magificently beautiful. 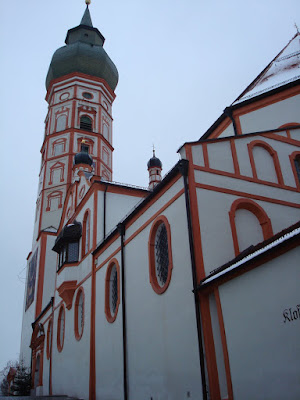 But, we were there for the beer. Jeff and I with Kloster Andechs Dopplebock Dunkel. According to Jeff the world's greatest beer. 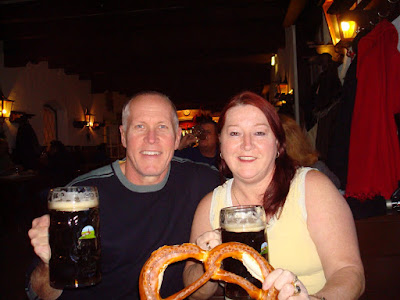 Four schwein haxn, a grilled pork knuckle, one for each of us. The world's biggest fat pill, but you gotta have one. They are sinfully tasty. 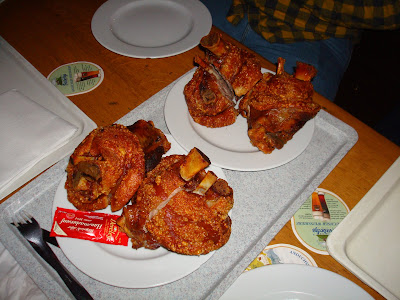 Our beer maid for our after dinner drinks. 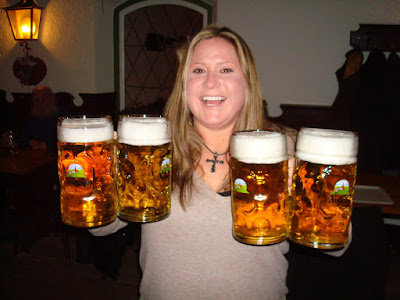 Megan and Will stayed in the King Ludwig II Suite at our hotel. Very nice and a little quirky, just like Ludwig. 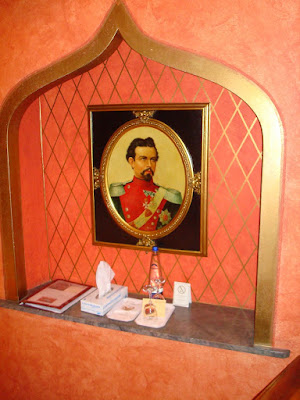 The throne in the King Ludwig II Suite. 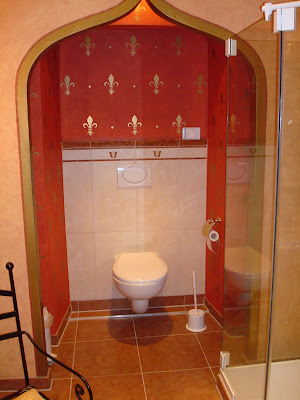 Well, that's it. A great trip and lots of fun with Megan and Will. They left, back to the States, yesterday and I miss my baby so much already.