Here's another one of those hard hitting news stories that Sandra didn't want to cover. So it's up to me again. 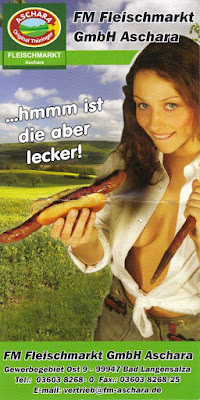 Fleischmarkt translates to meat market. We found this pamphlet on the counter of one of the food vendors at the Kaiserslautern Christkindlmarkt. This is an advertisement for the Fleischmarkt Aschara who happens to make a variety of pork sausages, including bratwurst. What I found most interesting about this whole layout was the rather humorous double entendre; meat market. Sausages versus a hot young lady. On top of that, there's a lot of suggestive imagery here too. Well, it certainly caught my eye so I guess it did its job.

Take a look at the company logo in the upper left. That red C, it's a sausage. Very clever again. German's can be funny people.

Oh, the . . . hmmm ist die aber lecker! translates to . . . hmmm but it is delicious! Is there another hidden meaning there?

You have to admit, it takes a smart advertising man to make sausages sexy.
Posted by Sandy and Jeff at Wednesday, December 08, 2010