When Germans have gathered for whatever reason for fun, festing and a few beers, repeatedly, throughout the event, someone will hoist their beer and boldly call out "PROST!!" It's another form of "Cheers" or "Bottoms Up" but to Germans it has much more meaning. When that declaration of "PROST!!" is made it's a statement by that person that "I'm happy you're all here, I enjoy being with you." After a "PROST!!" all folks in their group, and even others that aren't, will lift their beer and reach out to tap the glass or mug of everyone else also raising their beer. So with a "PROST!!", certainly, you want to tap the glass of all your friends but, as mentioned, often times you'll tap the glass of complete strangers sitting nearby who are enjoying the event too and your groups "PROST!!"

One other action must take place during a German "PROST!!"  According to tradition, if you don't make direct eye contact with the folks your prosting with then you're going to suffer seven years of bad sex.

See the picture of Jeff below. I've circled his eyes so you can easily see the eye contact technique that is necessary during a "PROST!! to avert that seven years of bad sex. 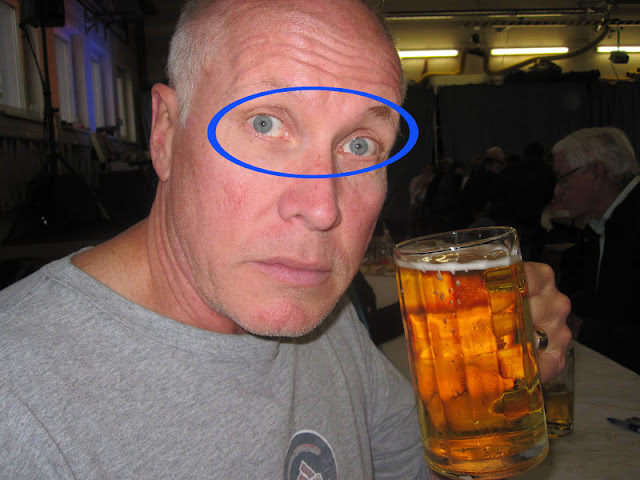 Now, last weekend, we were having a few beers with some German friends, Ziggy and Bridgette. Now both Ziggy and Bridgette are in their 70's and, although strictly adhering to direct eye contact during each "PROST!!", Bridgette had a very astute observation; seven years of bad sex is better than no sex at all. You know, I think she's right.
PROST!!
Posted by Sandy and Jeff at Wednesday, October 24, 2012