We made the hour drive to Wittlich for the 2012 Pig Festival. Jeff and I visited this fest two years ago by ourselves but this year we went with a group of friends. Here’s some of the images of the festival.

The story behind the pig festival is that during medieval times the town of Witllich was threatened by a barbarian horde but with a strong city wall the town folks felt safe. However, one night, the town guard couldn’t find the bolt to put in the lock on city gate so, as a substitute he used a carrot. During the night a pig happened along and ate the carrot leaving the gate unlocked. The barbarians entered and sacked the town. The folks that survived decided somone had to be punicshed for their misery and so they took their frustrations out on all the pigs in town.  I guess they forgot about the guard with the carrot or maybe he was dead. So they butchered all the pigs and had a great feast. And that began the Wittlich pig fest. Säubrenner-Kirmes, literally translates to Pig Torch Festival. Burn pigs burn. 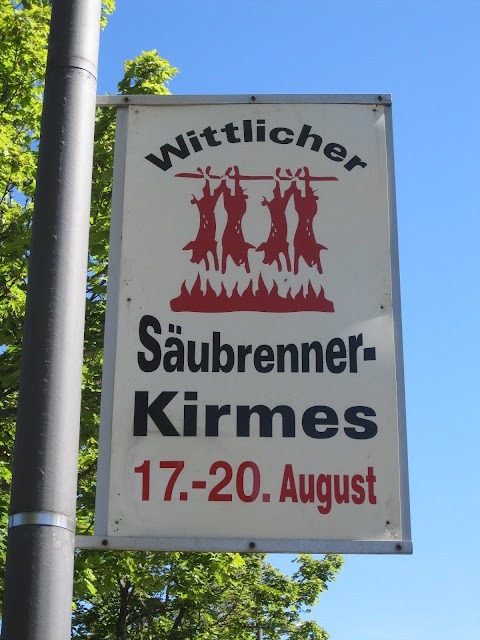 Jeff and I at Wittlich. Jeff’s got his pig festival shirt on. It’s a hot day in Germany, 95°. 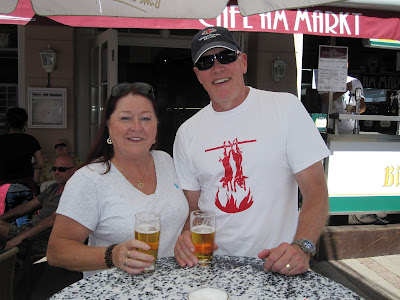 Here's our group under the Bitburger unbrella. From the left, Cassius, Jeff, Donk, Sue, Linda, me and Paige. Saint took the picture. There were also three teenagers running around in the sun and the heat. 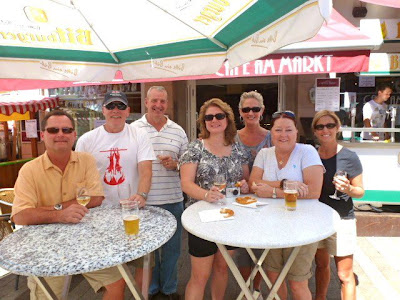 German, Pig Fest and Wittlich flags.  That's us hundled in the shade. 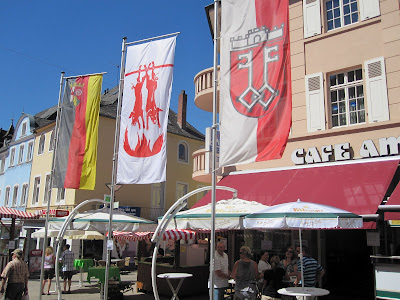 Big wine glass with the Wittlich double-key town crest. Everyone was trying to find some shade because it was wicked hot. 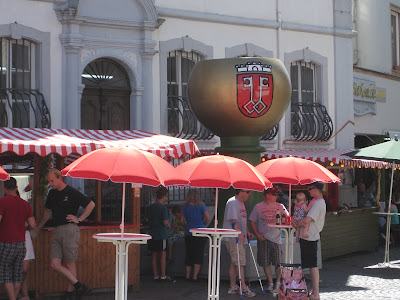 This is where the pig operation takes place. Two large pig spits and the meat cutters serving pork to the masses. The Pig Festival parade ends here with two large pigs ready to be placed on the spits. 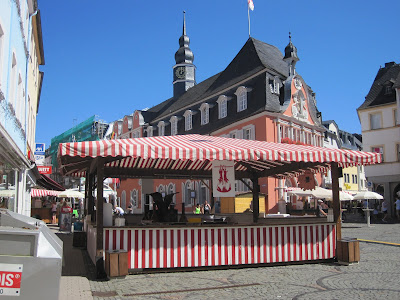 A pretty street on the parade route in Wittlich. We scoped out a great spot in the shade and just a short walk to the closest beer vendor. 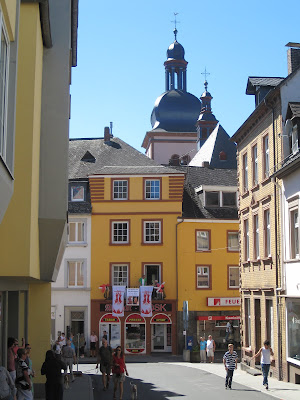 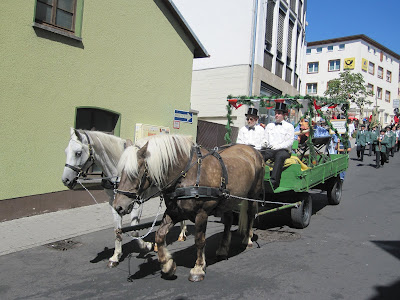 There aren’t many festivals where the grand marshals of the parade are dead or end up being eaten for that matter. 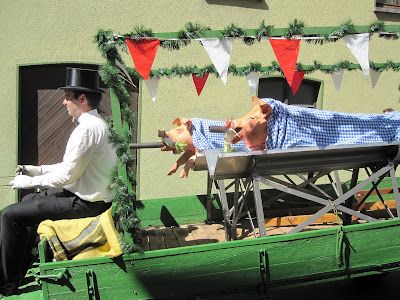 Germans love parades and they enjoy playing in a band too.  You'll see all ages in these bands.  The last group in this video are the Wittlich folks who weren't good enough to be in a band so they just marched with whistles.

The carrot ladies. Anyone need a carrot to lock their gate? 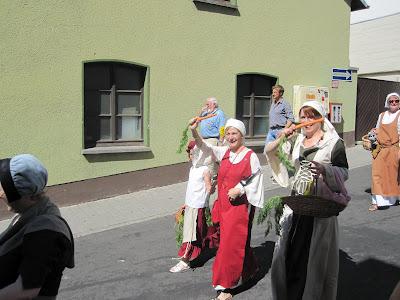 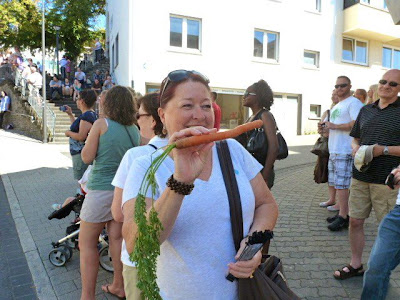 Jeff and I enjoying the parade. 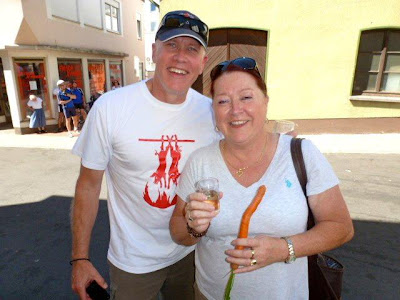 The Wittlich laundry club?!?!  Not sure I'd want to be in this group. 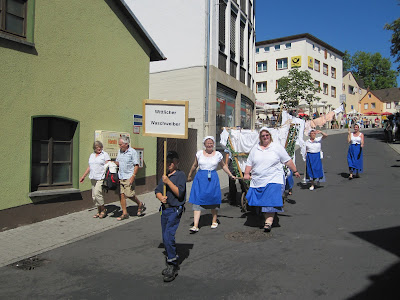 The pig queen and pig princess. 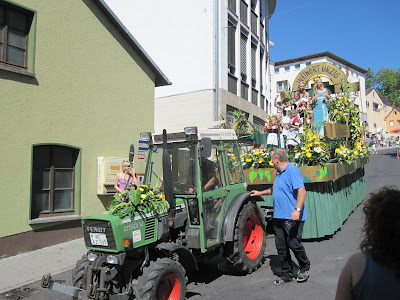 In the city square, the end of the parade. The pigs have arrived. 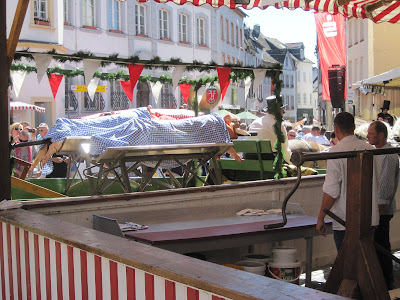 You can see that these are big pigs so it's not a simple matter getting them up on the spit.

OK, it’s on the spit and should be ready in, oh, eight hours. 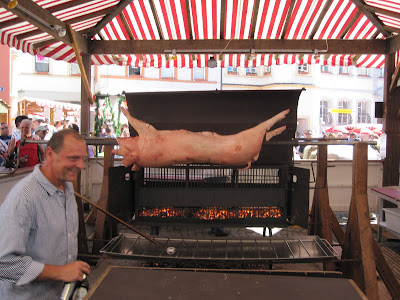 This is a two spit operation. 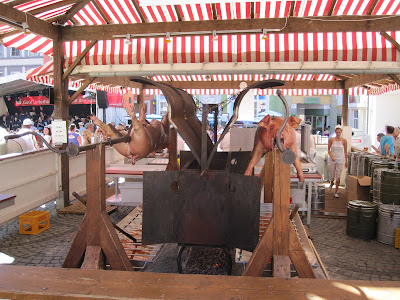 The feeding frenzy has begun. Luckily, they had plenty of pork already pre-cooked. 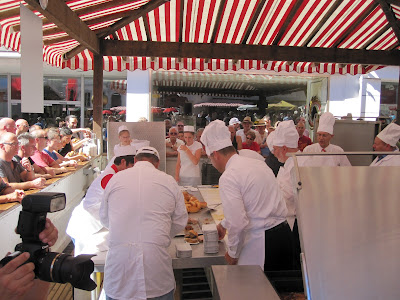 After the parade we really lucked out and found an open table in the shade.  We’re ready for some pork. 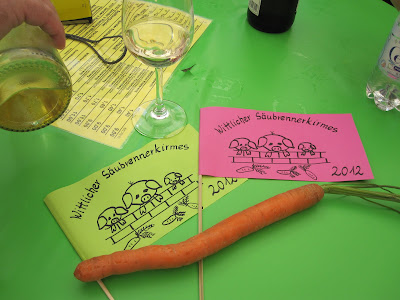 Linda and I, the crazy show’s in Wittlich. 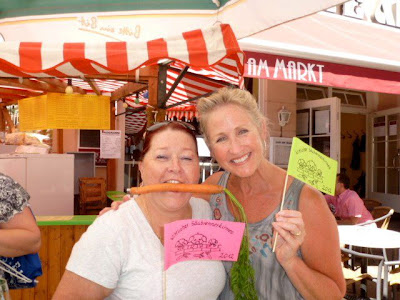 Jeff, Donk and I with the leader of the drum and bugle corps. Now that uniform had to be quite hot on this day. 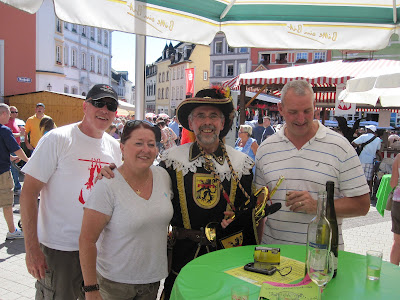 Well, not everyone was happy about the pig festival. Her sign says, “Pigs are emotional and intelligent.” But they taste pretty good too. 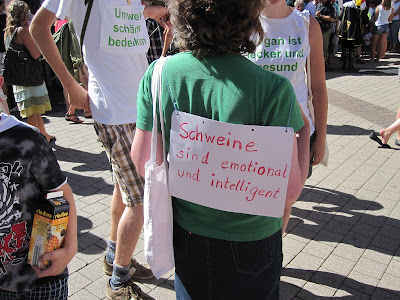 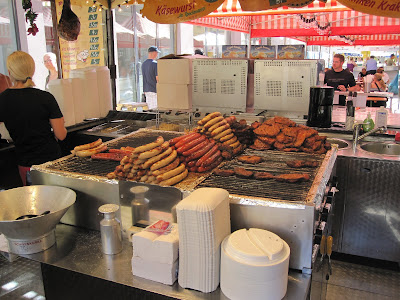 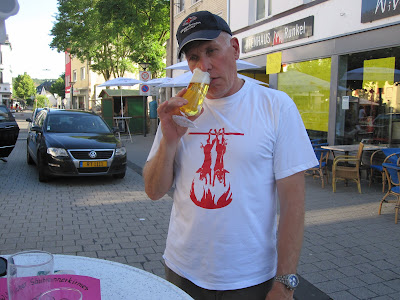 On the way home, just another pretty scene in Germany. Balloons and hills. 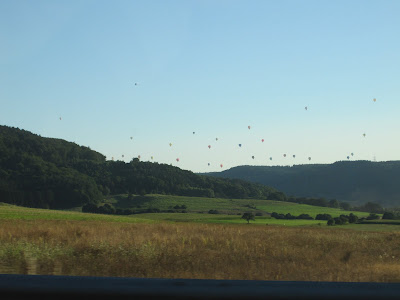 We're back at Cassius' and Linda's house.  German's build their homes so that when the weather is nice they can open the windows, no screens.  That's me in Linda's big living room window. Beautiful! 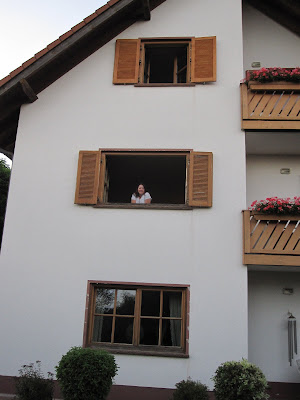 The Wittlich Pig Fest was such a wonderful event. Plenty of food, wine/beer, nice little parade, pretty town and a fun theme.  Plenty more festivals to come.  PROST!!!
Posted by Sandy and Jeff at Wednesday, August 22, 2012