Twenty-four years ago today, Jeff and I and our daughter Megan drove to Ramtein Air Base for Flugtag 88, a large, international military air show. The highlight of the air show, and the main reason Jeff wanted to go, was the final flying team of the day, Italy’s Frecce Tricolori. After walking around the ramp and checking out all the static display aircraft, Jeff wanted to get out to a good viewing point near the runway so we walked to show center just a couple hundred feet from the runway edge. It was a warm Sunday summer day and the flying displays were great fun and very near the spectators on the ground. After a couple hours Megan was getting warm and so, begrudgingly, Jeff agreed to walk to the car where we could sit her in the shade and he could watch the Frecce Tricolori from there.

We watched the ten member Frecce Tricolori take off and begin their show. At one point near the end of their show they split into two separate formations, one of five and the second with four. Climbing high above us, with their smoke on, the two formations then dived toward the ground, pulling up and passed each other just above the runway. The smoke path behind them formed a huge heart in the sky. At the point where the two formations passed a solo member of the team was to pass above the formation and, with his smoke, pierce the heart but that was where things went terribly wrong. Flying too low, and directly toward the crowd of spectators, the solo jet crashed into two of the aircraft in the lead formation. The solo slammed into the ground just in front of the spectators and its momentum caused him to cartwheel into the crowd, by then trailing a huge ball of flames caused by the exploding jet fuel. Of the other two damaged aircraft, one would crash into the runway and the other, on the opposite side of the runway, collide with a parked helicopter killing the on-board pilot.

Here's a video of what it looked like that day. It's a bit long (3:51)and probably over dramatized.

When it was all over 70 people were killed, 1000 injured, 364 seriously. At the time it was the largest air show disaster in history. The following morning when Jeff went to work on Ramstein the road leading to the base from the autobahn was lined with the cars of the dead and injured. As a result of this incident, flying was not allowed at any air shows in Germany; that is until 2011 at the Spangdahlem air show. Even after twenty-three years, the announcement that there would be a single A-10 and a single F-16 doing individual fly-bys at the Spangdahlem air show caused significant criticism and protest.

Watching the crash from a distance Jeff and I knew that Megan’s discomfort in the heat and sun of the day and our decision to walk back to the car had certainly saved us serious injury and maybe even our lives.

Today, about 3/4 of mile outside the west gate of Ramstein Air Base is a very large pull over, parking area with this sign pointing to a public walking path.  28 August 1988 Flight Day Catastrophe Memorial. 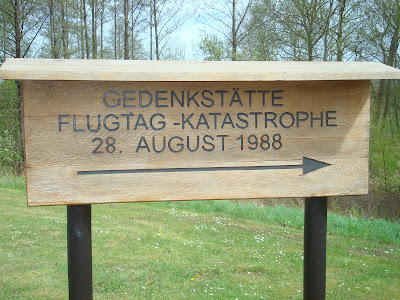 This memorial sits not far from the western end of the Ramstein runway and commemorates the 70 people that died that day, 28 August 1988. 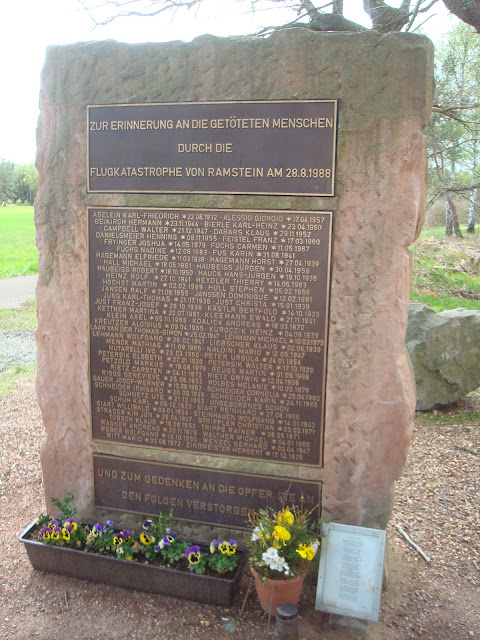 So today, being here at Ramstein, the images of the incident that day are still vivid in our minds and with that, the realization that an insignificant event, like a small child's discomfort, could very well have an impact on your life in ways you have no way of foreseeing.