While driving around Germany it’s pretty easy to determine where a particular car or truck happens to be from by looking at its license plate. Most German license plates start with either one, two or three letters. For the most part, the largest cities in German have a license plate that begins with the first letter of the city; B--Berlin, F—Frankfurt, M—Munich, S—Stuttgart. The plate below is from Köln (Cologne). 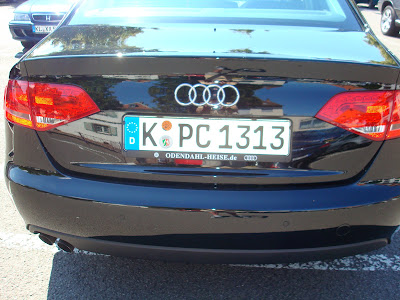 Smaller cities, along with the surrounding rural area and towns, have two letters. Below is our license plate with a KL for Kaiserslautern. Others are DD—Dresden, FD—Fulda, MZ—Mainz, WI—Wiesbaden, Würzburg—WÜ (Dirk’s hometown, YEA Mavericks!!). 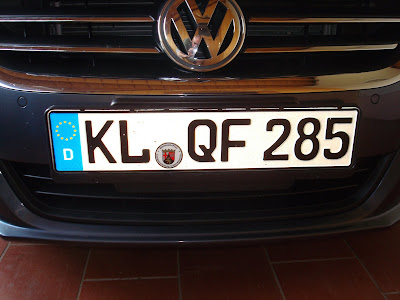 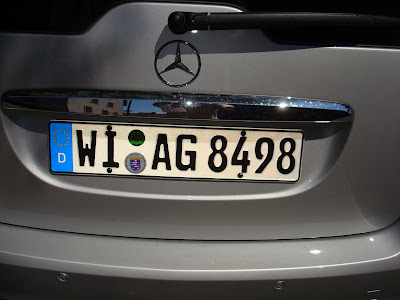 Even smaller towns and regions with the fewest registered vehicles have three letters. KIB is for Kirchheimbolanden, the town we lived in twenty years ago. Other three letter license plates are BAD—Baden-Baden, BIT—Bitburg, GAP—Garmisch-Partenkirchen, WIL—Bernkastel-Wittlich. 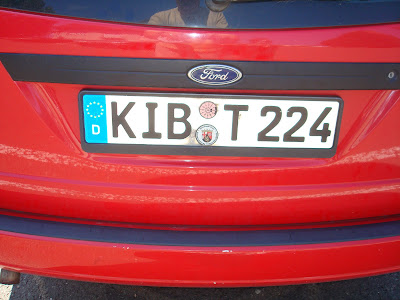 This vehicle license convention was established by West Germany just a few years after WWII. Although Germany was a divided country at that time, the West German government saved some license designations for cities in the east, for example, L for Leipzig, P for Potsdam, for the time when the two Germanys would be reunited.

There are over 500 German license plate designations so it’s certainly more than one can remember. But, it’s still fun cruising along the autobahn, to look over and see a DW plate and say, “Hey, they’re from Dippoldiswalde-Weißeritzkreis.”

By the way, in 2005, the US military in Germany began putting regular German plates on US service member's private cars, like our KL plate above. So now folks stationed here better integrate into the local vehicle traffic and draw less attention.
Posted by Sandy and Jeff at Wednesday, November 09, 2011