We've told you about Fasching before. It's the carnival season here in Germany. Last March we celebrated the final days of Fasching in Mainz. Last Friday we were Köln (Cologne) for the beginning of the new Fasching season. For those areas of Germany that celebrate Fasching, or some form of carnival, it begins on November 11 at 11:11 in the morning. So this year being 2011 there was special anticipation and even greater participation because of the unique day and time; 11-11-11 at 11:11:11.

Here's some pictures from our adventures in Köln.

We arrived in Köln Thursday afternoon so that we could check out the lay of the land for the festivities that would begin Friday morning. We stopped by a favorite Köln gasthaus, Malzmühlen (Malt Mills). 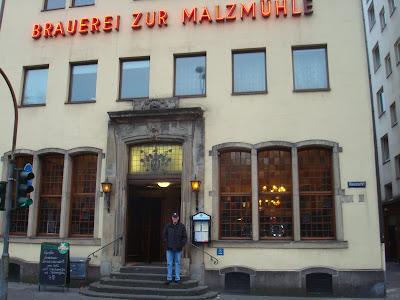 Malzmühlen is a little off the beaten path but the friendly people and great beer, Mühlen Kölsch, make it quite an enjoyable stop. The history of the place is quite interesting too. It's a fifth generation gasthaus that was almost completely destroyed in WW II. If you look at this picture, which was taken from their menu, you'll see that really the only thing remaining of Malzmühlen in 1945 was the stone door frame. Look in the picture above and you'll see that door frame still remains today. 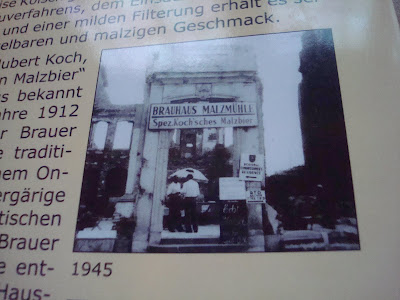 Like most places in Köln, Malzmühlen serves a Kölsch beer, their own, and they're served in these .2 liter glasses. But, fear not, waiters are very attentive and are there to quickly replenish with a fresh glass of their amber nectar.  You can see the tick marks under my hand; one for each beer ordered. Although a once common practice in Germany, Köln is now one of the few places where the tick-mark-on-the-coaster method is still used. 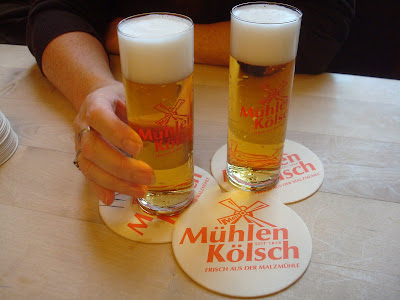 Another place we enjoy in Köln is Max Päffgen, a unique gasthaus on the north end of Heumarkt (Hay Market) in the city's old town.  One reason is the awesome woodwork inside and these distinct tables with the brass figures. 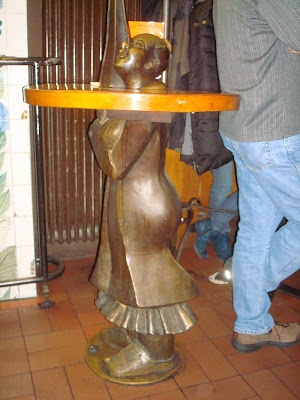 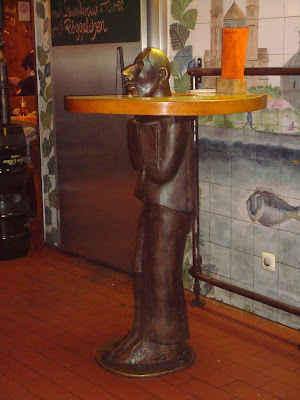 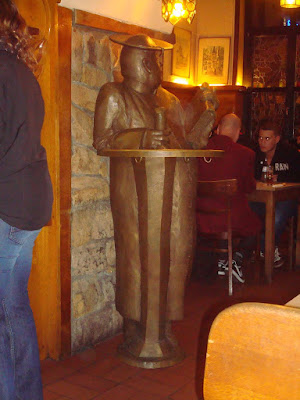 OK, it's 11 November and we're about to start our walk over to the Fasching festival area. We stayed at the Hyatt Regency just across the Rhine River from the Köln Cathedral, an easy walk across this railway bridge. 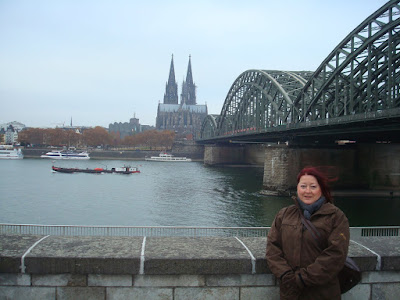 Here we are in Heumarkt (Hay Market) again, where the main festival activities take place. It's about 0930 and you can see this is as close as we can get to the band stand where music will play well into the night. 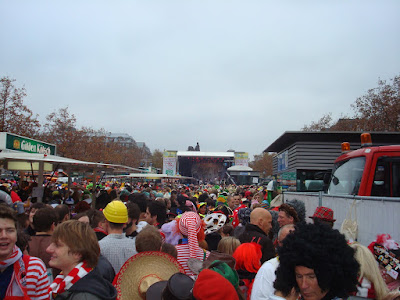 Lots of people brought in thier own beverages, which was more than welcome as long as you had no glass. Here's a guy carrying his mini-keg of Reissdorf Kölsch.  It wasn't uncommon to see a guy carrying a case of 16 oz. beer cans.  Quite a few women had fruit cartons with a jury-rigged strap that probably had some mixture of fruit juice and their favorite beverage. Bringing in your own drinks was for two reasons; cost savings for sure, but also, once you waded into the crowd in the square, you weren't going to be able to move about and easily get a drink or much of anything else. 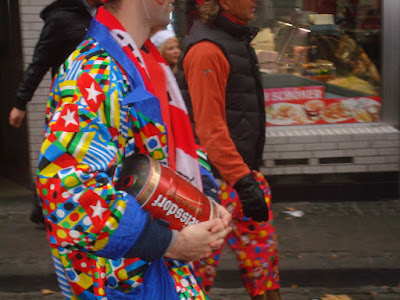 Just about everyone had on a costume of some sort. We saw lots of Batmen, Supermen, escaped prisoners, Arabs, fighter pilots, airline pilots and some really ingeniusly unique costumes too. 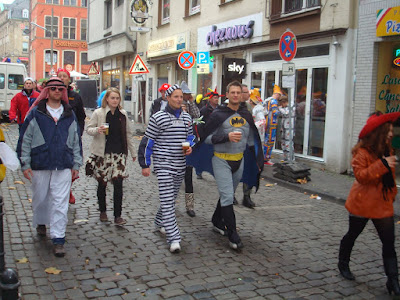 Another good idea before wading into the crowd, a quick piss stop. This was a rather interesting  contraption; a quick in and out. Certainly can't be shy. 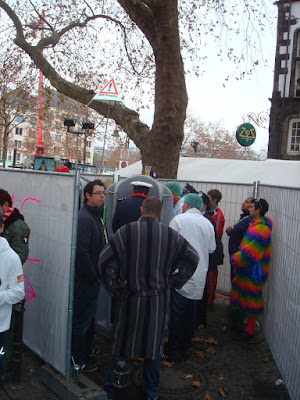 Here's another, more conventional toilet. The interesting thing here is you can see by the color code on the doors that the red stripe indicates women on the left and blue stripe on the right for men. However, you can also see that both lines consist of women, except the one Afro haired guy. Women can be bold when it comes time to pee. 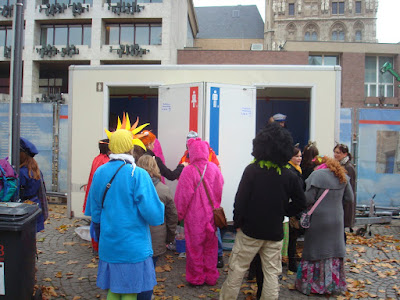 Another Köln Kölsch, Gilden, with a special designed can for Fasching. 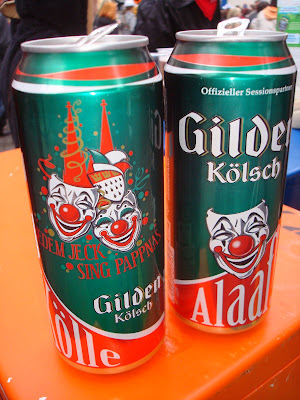 Now we're at the opposite end of the festival area where they had a huge screen TV showing the bands and activities on the bandstand.  Still lots of fun and festivties.  Check out the toadstool ladies.

Just a few of the costumes at the Köln Fasching festival. You'll notice there's a good number of team costumes.  Banana men. 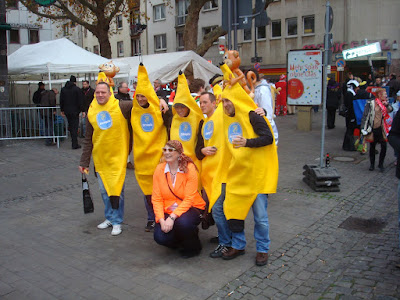 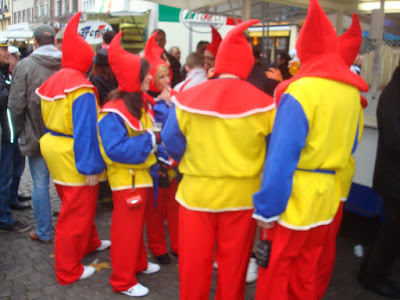 This guy is covered in the Köln city crest. 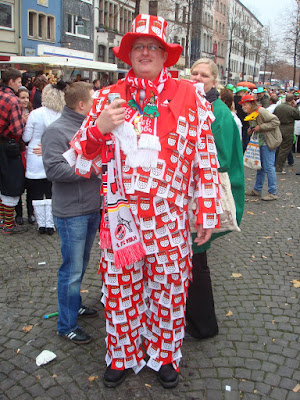 Fairies. You can see why some costumes require the team effort. No guy wants to be the only one wearing this. Notice to one fairy is smoking. Totally destroys the fairy image. 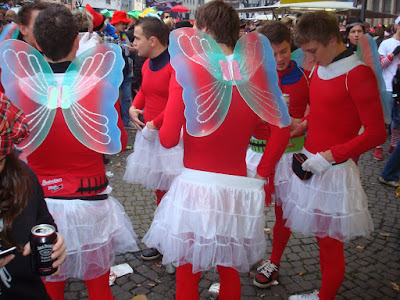 The Pope made it and brought along his favorite Cardinal and nun.  Remember, the Pope is German. 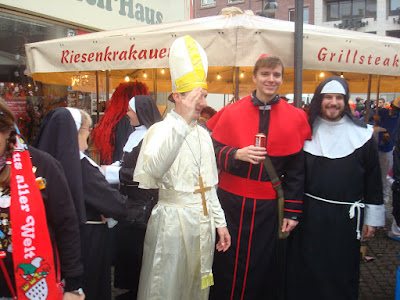 Genghis Khan came and brough along some of his barbarians. 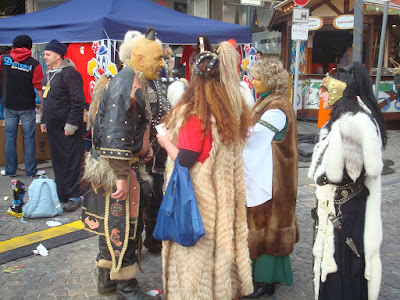 Me with Captain Duff. 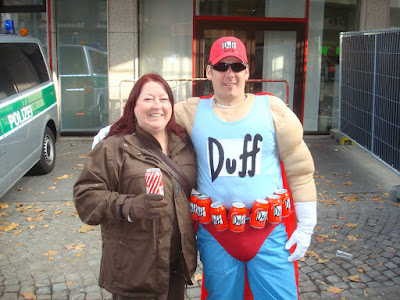 Even we were in costume. Well, we got the red nose for free from some vendor. Jeff with the most famous Kölsch of all, Früh. 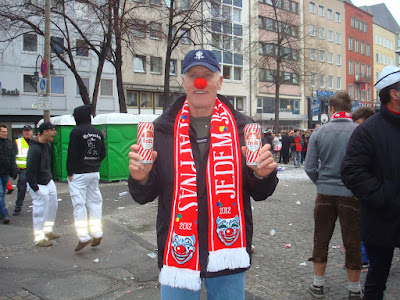 These Fasching festivals always design a special scarf for the new season. This one is pure genius. The clown faces are actually pockets. Perfect for a can of Kölsch on a chilly day. 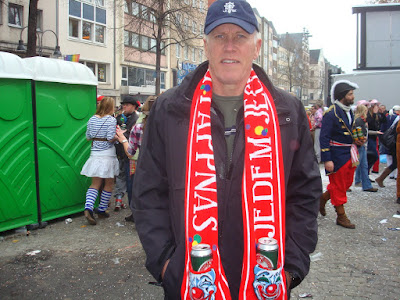 OK, we either found Waldo or this is a slumbering fairy or he's just a drunk. 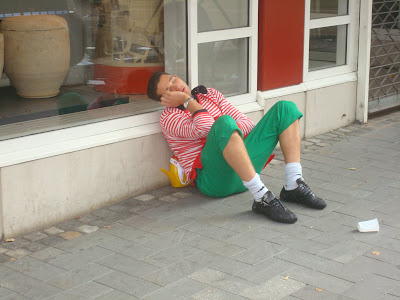 Random bands showed up in force and found a place to play.

As you would expect, and previously mentioned, toilets were much in demand. This was a rather poor setup.  Seven portable toilets configured in this U. Just a mass of humanity milling about with hopes of being pushed to an available stall. Of course, lots of guys just walked around the back and went au naturale. 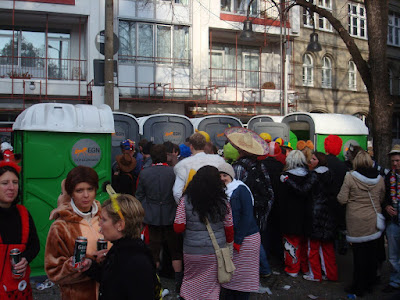 Like I mentioned, the music and festing went on well into the night and when were able to get a bit closer to the bandstand. 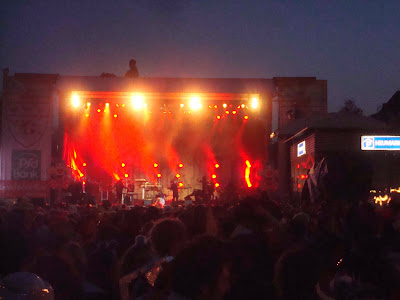 Plastic and aluminum, no glass.  See, the mini-kegs were quite popular. 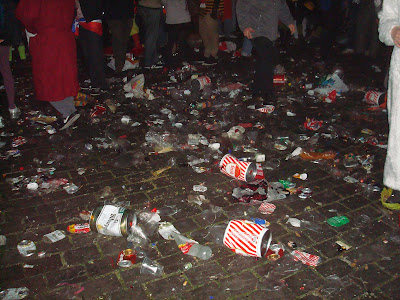 Here they come. Party is almost over. Time to clean up. 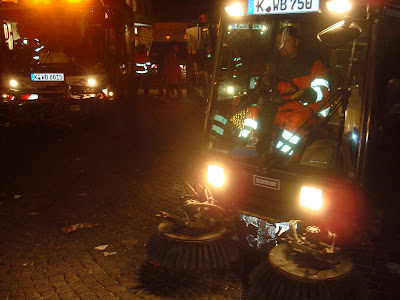 Yeah, that was a crazy day and night. Next week the Christmas markets start here in Germany; a little more sedate but also lots of fun. PROST!!
Posted by Sandy and Jeff at Wednesday, November 16, 2011