Strasbourg is the capital of Alsace. It sits along the Ill River which flows into the Rhine River just east of the city. Across the Rhine lays Germany and its Black Forest. Strasbourg shares its past with Alsace of having been part of France and Germany at various times throughout history and, like many towns in Alsace, has a Germanic name. Having one of the largest ports on the Rhine River, Strasbourg has long been a major commercial center. Strasbourg suffered all the usual events of ancient European cities, war, sickness, religious persecutions but in July 1518 the city was visited by the mysterious Dancing Plague. Some 400 citizens were struck by a dancing mania that caused them to dance constantly for weeks and resulted in most of them dying from heart attack, stroke or exhaustion. Strasbourg's magnificent city center is actually a large island in the Ill River, the historic Grande Île (Grand Island), the location of most of the city's tourist attractions; the Strasbourg Cathedral, the Cathédrale Notre-Dame-de-Strasbourg or the Cathedral of Our Lady of Strasbourg and Petite-France. Today, Strasbourg is the location of the European Union Parliment.

After we checked into our hotel we walked to Cathédrale Notre-Dame-de-Strasbourg, the Strasbourg Cathedral. It is incredibly beautiful and, having been the tallest building in the world until 1874, it is still visible from miles around. 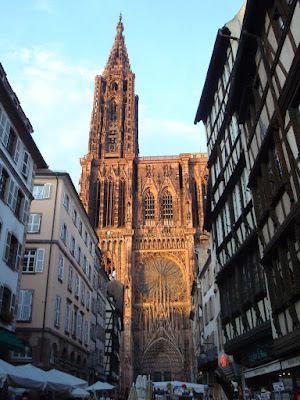 Like many European churches, the Strasbourg Cathedral is built in the shape of the cross.  Inside is truly breathtaking. 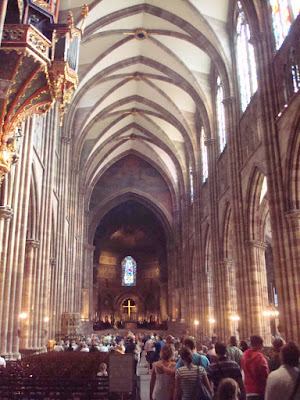 The cathedral's stained glass windows are some of the oldest in the world having orginally been installed in the 13th and 14th centuries. 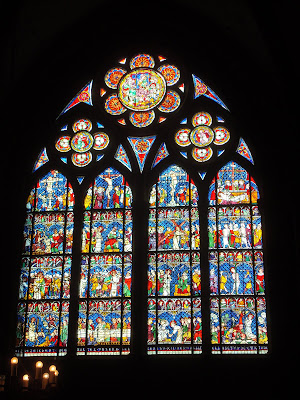 The back window of the cathedral and the main organ. 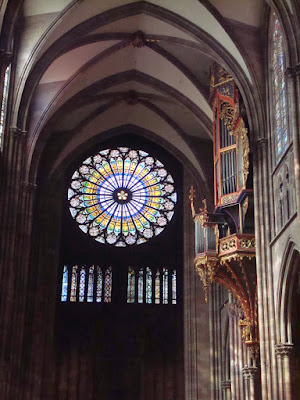 Located in the right transept is the Pillar of angels, here on the left, and one of the largest astronomical clocks in the world.  Although not the original clock located here this one was built around 1840.  It tells the phases of the moon, equinoxes, leap years, current zodiac sign and much more.  At 1230 PM each day the entire clock can be seen in motion. 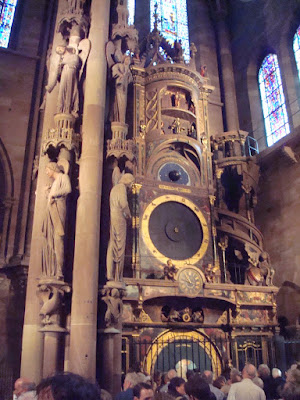 Maison Kammerzell is a medieval building built in 1427. It sits in the square just outside the cathedral. 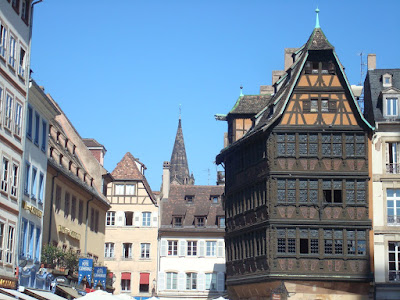 There are lots of ancient rooftops in the Strasbourg city center. This highest roof is also just outside the cathedral. Really amazing to think of medieval workers building these tall structures. Those top windows are on what looked like a ninth floor. 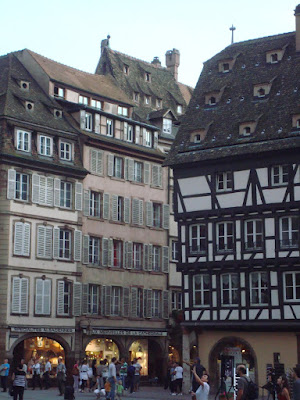 The next morning we're walking around the corner from our hotel to a nice brakery when we run into this.  Europeans sure like the mad baby theme. 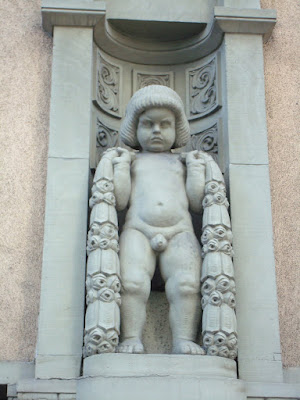 He had a great breakfast at Kern which turned out to be much more than just a bakery. We had a tasty Quiche Lorraine and a pastry. Kern also had a nice vegetable and butcher area. It was lots of fun to watch the butchers in action; prepping a chicken for sale, removing the head and claws. Here's a full beef leg they were getting ready to work on. 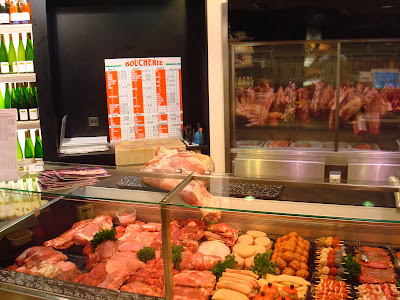 An entire rib cage at the Kern butchers. Not sure what it is; goat, pig, lamb, deer, small horse. Also, for sale were rabbit, duck, pheasant, dove; seemed like every type of small animal. 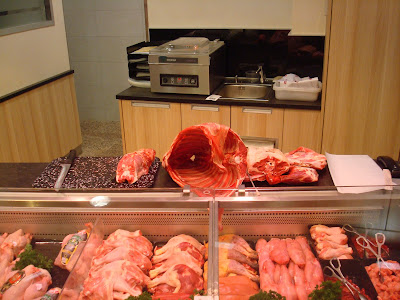 A major attraction of the Strasbourg city center is an area called Petite-France. Numerous old half-timbered buildings and homes right on the Ill River. 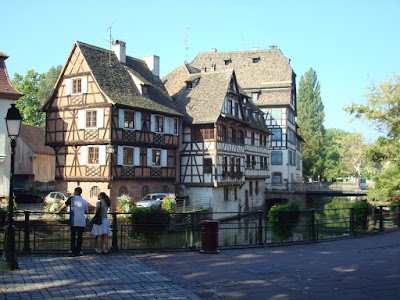 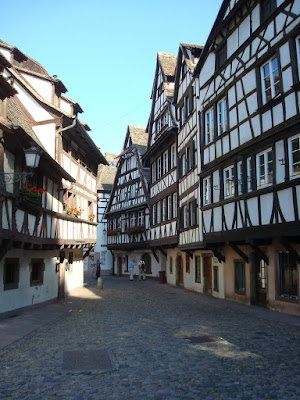 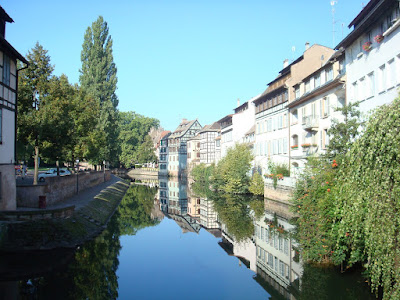 On the upper right of the roof you can see the structure that is placed high on various structures to attract storks and hopefully build their nest there. Guess there's too many tourists around to attract them here. 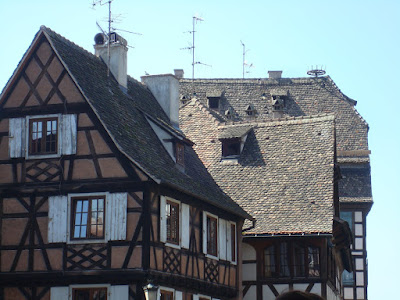 You know doing this tourist thing can really make you thirsty. So once in a while you've got to stop and quench your thirst.  Here's an interesting logo on a fine French beer, Fischer Tradition; a little boy sitting on a beer keg drinking from a huge glass of amber nectar. Not too PC these days. 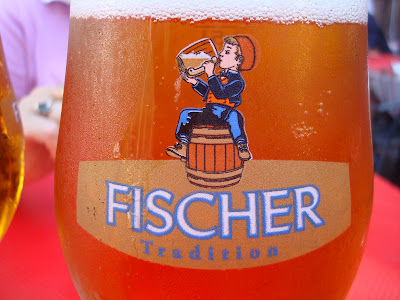 Fun couple days in France. Happily we filled two squares; Alsace Wine Road and Strasbourg. Pretty sure we'll be back since it's so close, probably wine inventory gets a little low.  Au revoir!!!
Posted by Sandy and Jeff at Sunday, September 04, 2011