We live just a half hour from the German/French border. Just a bit further is the Route des Vins d'Alsace (Alsace Wine Road) in the Alsace region of France, a two hour drive from our home. Having never been there, or to Strasbourg, France, Jeff and I decided that was our destination for Labor Day weekend.

Alsace is the northeastern most region of France. It sits west along the German border which consists of the Rhine River. The Alsace wine country lays between the north-south Vosages mountain range and the Rhine and begins just west of Strasbourg running 70 miles south to Mulhouse near the Swiss border.

Alsace has an interesting history because it is situated between France and Germany and at various times has been part of both countries. After the defeat of France in 1871 Germany unified for the first time and took possession of Alsace as a spoil of that war. When Germany was defeated in WW I, Alsace declared itself an independent republic, but that was quickly squashed by France when French forces occupied the region. Germany annexed Alsace prior to WW II and France once again took it back after the war. Today, part of France, Alsace has special privileges, known as local law, not available in the rest of the country. Although not mandatory, Alsatian is taught in schools but French is the official language.

One bit of advice we got before we drove to Alsace was to get a map of the Wine Road. Even though the Wine Road is marked it's easy to get off track. We saw probably five different signs of varying colors posted along the route. Plus, especially in towns, the French have a habit of posting numerous kinds of signs all on the same post so the one you're looking for can easily be missed. Here's the predominant sign used; Route des Vins d'Alsace (Alsace Wine Road). 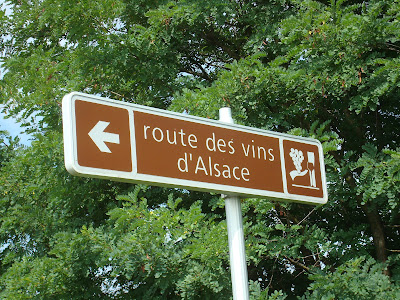 This is a sign at the first place we stopped along the Alsace Wine Road, Molsheim, France, for a little wine probe. I think that's the town crest on the left. Rather gruesome, appears to be some saint chained to a wheel. 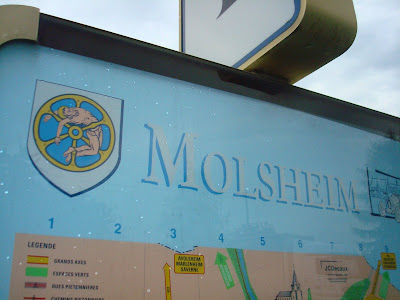 Vin D' Alsace (Wines of Alsace), the first wine probe at Robert Klingenfus in Molsheim, France. Alsace wines are named after the grape variety, unlike the rest of France where wines are named after villages or vineyards. The Alsace varieties are Sylvaner, Muscat d'Alsace, Pinot Blanc, Pinot Gris, Riesling, Gewurztraminer and Pinot Noir, the only red. 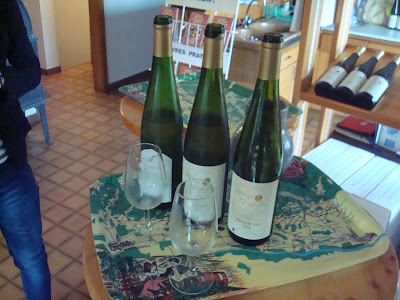 Seemed like almost every town along the Wine Route had a gate tower like this as you entered the village. This is Molsheim, France. 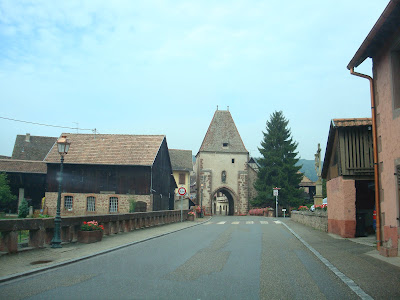 Here's another type of sign that directed us along the Wine Road. A bit smaller but still the same color as the first. We did see white signs and yellow signs that looked nothing like this that were also used; a bit confusing. 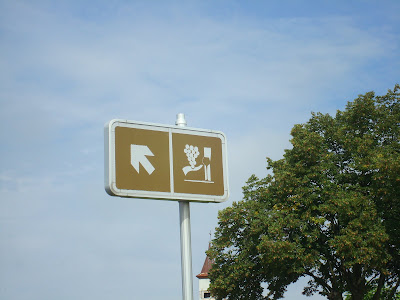 Almost all Alsace wines are white. The exception is Pinot Noir which is a light red, almost a Rosé. The Pinot Noir grapes are dark red to purple. These look ready for harvest. 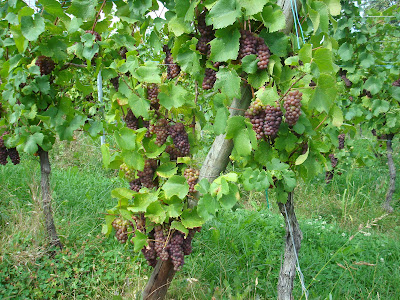 Yes, the Pro from Dover says these grapes are ready. 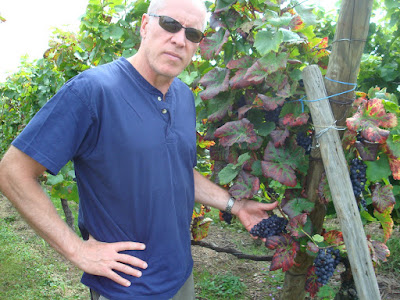 I guess he's right. All the grape harvesting we saw was being done by hand. 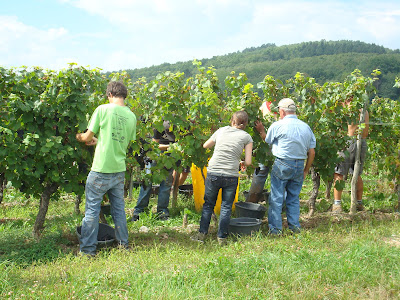 One of the pretty wine villages along the Route des Vins d'Alsace is Dambach La Ville. 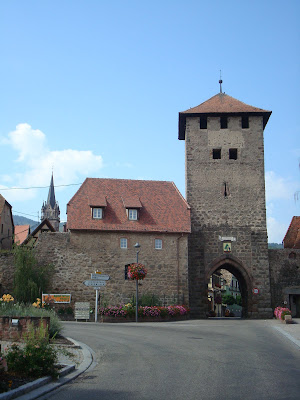 This is the type of small, narrow tractor that's used in vineyards all over Europe. The cart is full of plastic containers used to harvest the grapes. They only fill those containers about two-thirds full, I guess so that they don't get too heavy and can still be lifted. 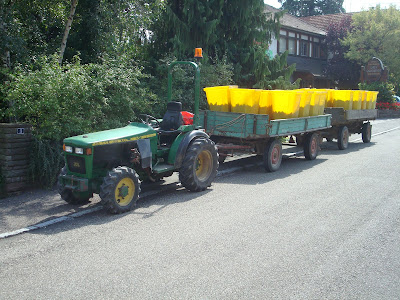 This wooden cart and containers are what was used before tractors and plastic became available. 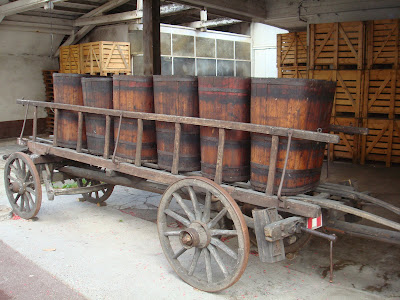 Yes, after indepth research, the Pro from Dover says there are grapes in there. 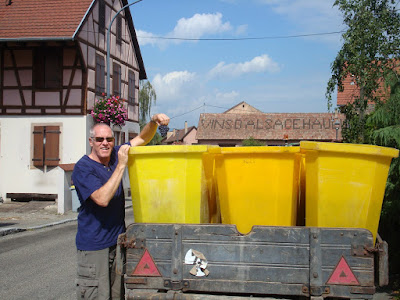 The stork is a symbol of Alsace. Here's the first stork nest we saw in one of the villages along the wine road. 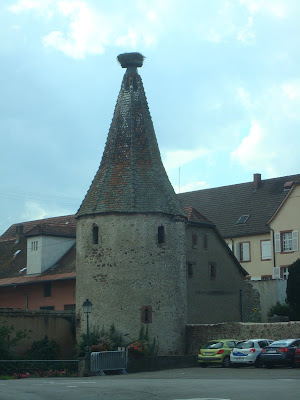 Ribeauville is a very pretty town along the Route des Vins d'Alsace and one of the most touristy. Here you can see the entrance to their walk platz with two castle ruins high above. 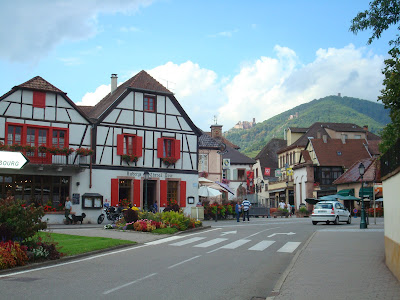 Pretty building in Ribeauville and more images of the town below. 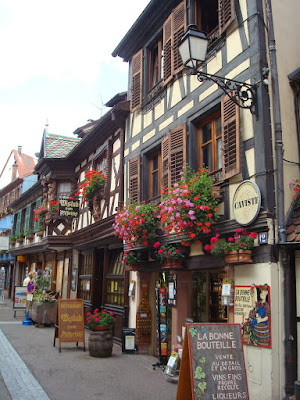 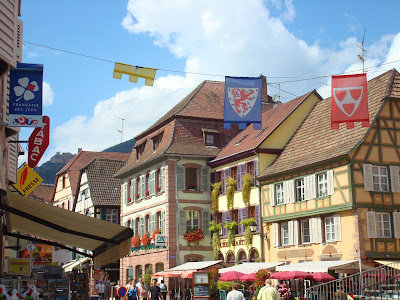 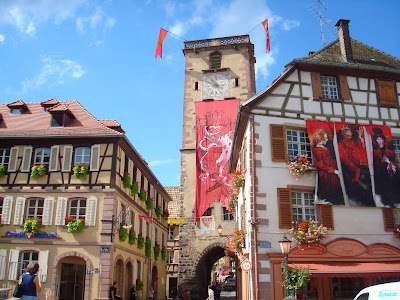 A stork nest on one of the roofs in Ribeauville. The stork idea is quite romantic but here you can see that they're like any other bird; they go where they want. 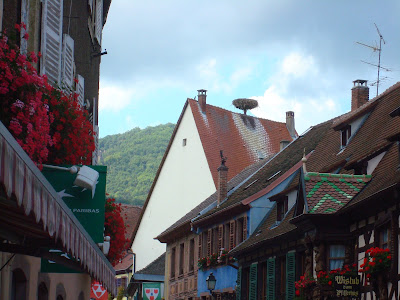 Riquewihr is another charming Alsace village. The Alsace wine country is one hill upon vally upon hill upon valley of vineyards. Beautiful! 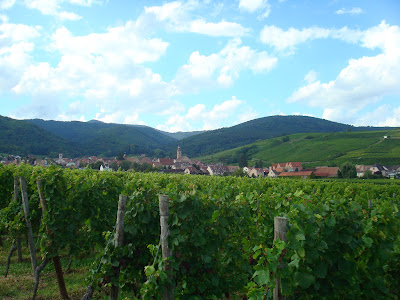 Our last stop along the Route des Vins d'Alsace was another wine probe, this time at Earl Aimé Fonné in Bennwihr, France. Beautiful countryside, charming villages and towns, great wines. What a fun day. Cheers!! 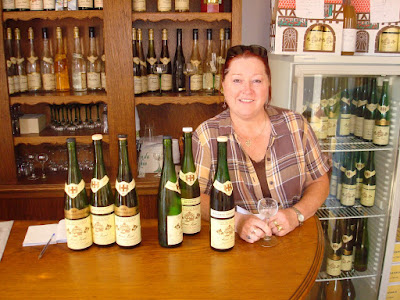