We've been to a lot of Oktoberfests in Munich, fourteen total. Our first Oktoberfest was in 1987. Over the years we've had so many great times with so, so many wonderful friends. One question we get quite often about Oktoberfest is what are the beer tents like. So this year, while we were at the 2011 Oktoberfest, we did a quick inventory of the main beer tents. There are 11 main beer tents at Oktoberfest, at least in our opinion, although the official Oktoberfest web site claims 14, with a number of smaller, lesser tents. Each tent serves the beer of only one of Munich's "Big Six" breweries.

If you walk into the Oktoberfest grounds from the train station, to the north, and walk south along Wirtsbundenstraße, which we call "beer alley," the first tent you come to is Hippodrom.  This is the smallest of the main tents with 3200 seats inside and 1000 outside.  It has a very distinctive look with its bright red and yellow facade.  Hippodrom serves Spaten beers. 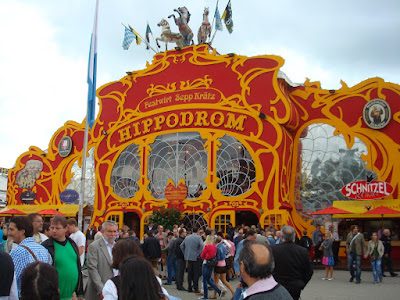 Just as colorful inside the Hippodrom as outside. 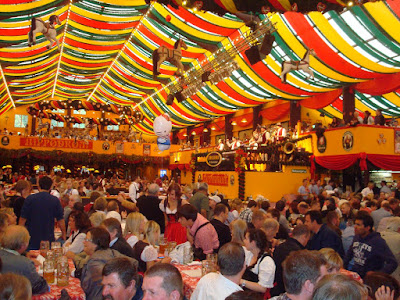 The Armbrustschützenzelt sits 7430 folks, inside and outside.  Armbrust means crossbow, so the entire name translates to Crossbow Shooting Tent.  The tent still maintains a hunting theme which attracts many shooting clubs from around Germany.  Paulaner is served in the Armbrustschützenzelt. 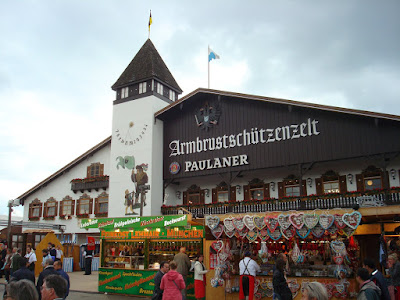 You can see the hunting theme inside Armbrustschützenzelt with the mounted game heads. 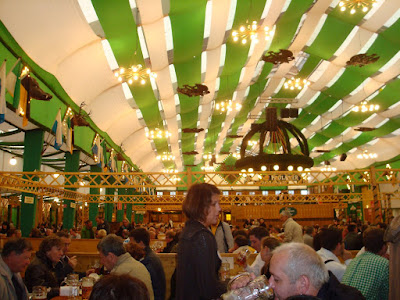 Ochsenbraterei is one of our favorite tents.  Ochsenbraterei means ox grill and that's just what they have in their tent, a rotating spit that holds an entire, full grown cow.  Obviously, the specialty in Ochsenbraterei is various beef dishes.  This tent holds 5900 people inside and another 1500 outside.  They serve Spaten beers in the Ochsenbraterei. 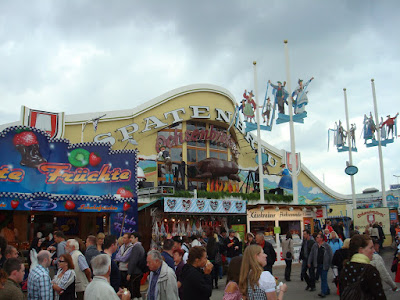 The Ochsenbraterei spit. Looks like it's time to put on another cow. 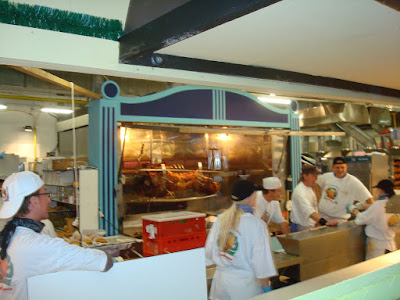 Pretty inside the Ochsenbraterei  with the blue and white Bavarian colors. 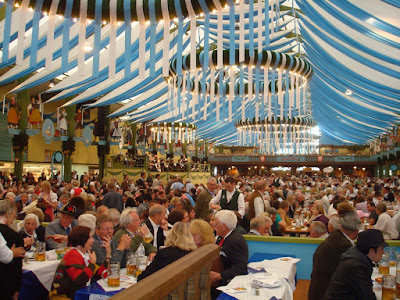 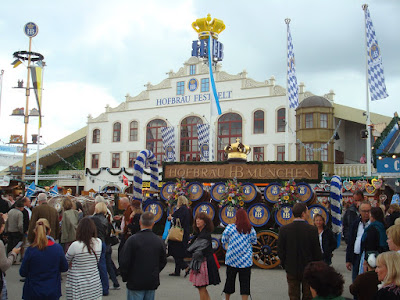 Big hops chandeliers hang from the ceiling in the Hofbräu Festzelt. 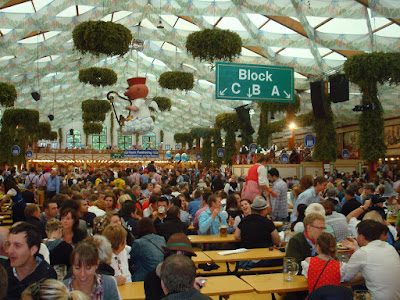 The Hacker Festzelt is one of the largest tents seating 9300 people inside and out.  They serve Hacker-Pschorr beers.  The Hacker tent is considered one of the prettiest tents with its blue sky, white clouds and stars and as a result the tent is called the Himmel der Bayern, Heaven for Bavaria. 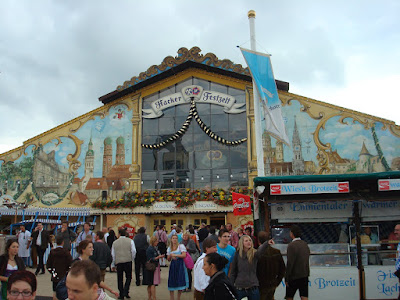 Street scenes of Munich surround the tent in the Hacker Festzelt and the ceiling is the prettiest of all the Oktoberfest tents. 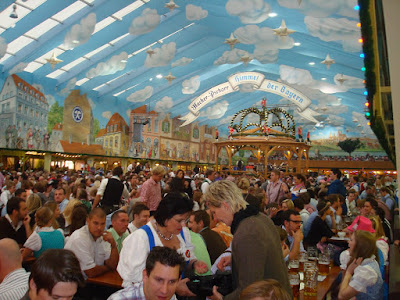 Augustiner-Bräu obviously serves Augustiner beer which many consider to be the best of Munich's "Big Six" breweries. The tent holds 6000 inside and another 2500 outside.  The colors inside are darker than other tents but it also makes the atmosphere warmer and inviting.  We like this tent and especially like that they've chosen to use Jeff's initials in the logo, JW. 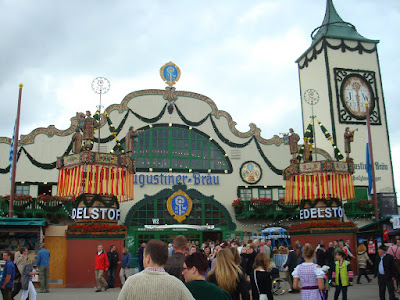 Dark colors in the Augustiner-Bräu but still a very nice looking tent and maybe the best beer. 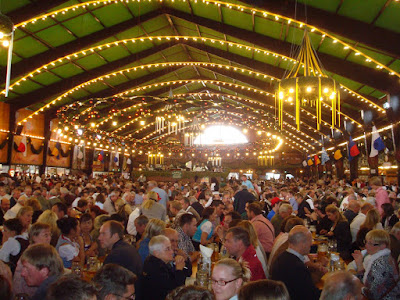 The Augustiner beer is still poured from wooden kegs. 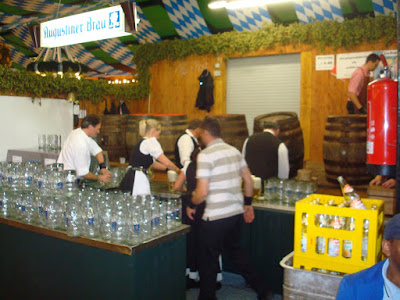 Schottenhamel is the oldest of the Oktobefest tents having begun operations at the festival in 1867.  It is also the location of the annual opening ceremony where the mayor of Munich taps the first keg.  The tent holds 6000 inside and 4000 outside.  Schottenhamel is the only tent that has a square table and bench configuration which we don't like.  They serve Spaten in the Schottenhamel. 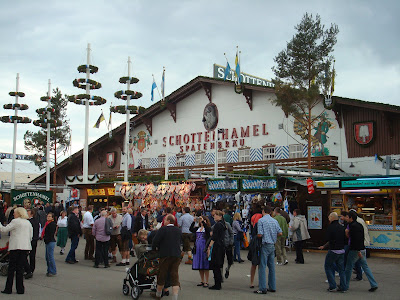 The Schottenhamel is a big tent and the oldest. You can see it's a very well lit tent. 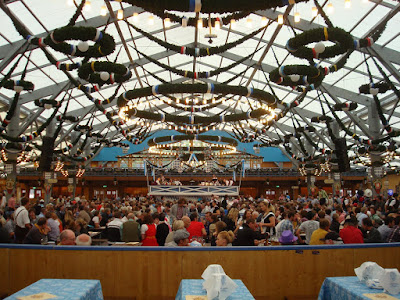 The Pschorr - Bräurosl tent has been around for over a hundred years and run by the same Heide family, seven generations, all that time.  It seats 8400 people inside and out and they serve Hacker-Pschorr beer.  The Pschorr - Bräurosl is considered one of the more traditional tents complete with its own yodeler. 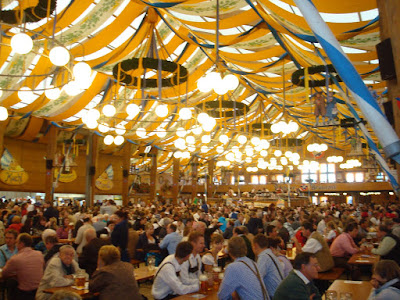 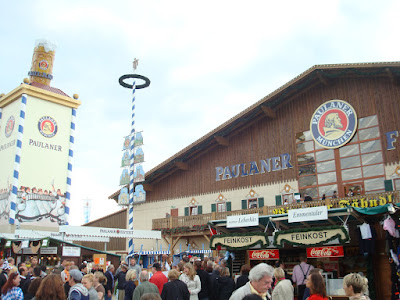 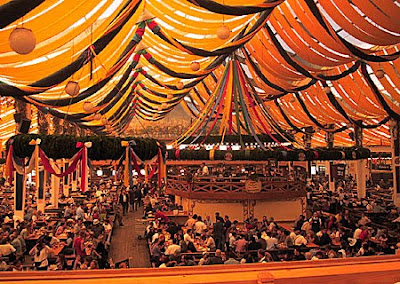 Our favorite tent is the Löwenbräu Festzelt because of Stephanie Spendler.  Stefi runs the Löwenbräu tent and sends us a letter each spring asking if we plan to attend Oktoberfest that year.  She has taken great care of us over the years and always reserves us a great table right in front of the band.  Löwenbräu seats 5700 inside and another 2800 outside.  Of course, Löwenbräu beer is served here. 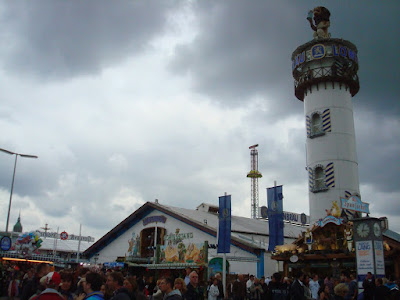 Our favorit tent in the Oktoberfest, Löwenbräu Festzelt. 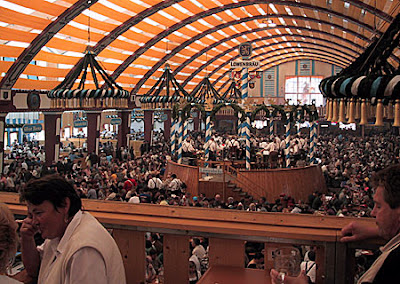 At the foot of the statue Bavaria is the Schützen (Shooters) Festzelt which sits 5440 with only a small outside area.  This tent has about quadrupled in size over the years that we've been attending Oktoberfest.  At one time, and maybe still does, it contained a shooting range where gun clubs from around the country come to match their skills against others.  Schützen Festzelt serves Löwenbräu beer. 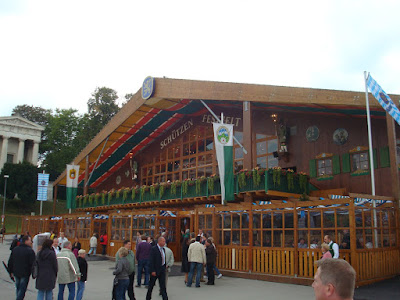 Always a fun crowd in the Schützen Festzelt.  But, I guess that can be said about just about every tent at the Oktoberfest. 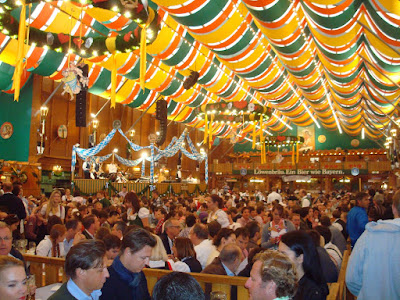 There are other tents but in our mind they don't quite meet our standard for being called a main beer tent; Käfers Wiesn Schänke, and Fischer-Vroni each sit about 3300 (give us a call when you break the 4000 mark) and the Weinzelt - Nymphenburger Sektkellerei (it's a wine tent for goodness sakes).

An amazing fact about each one of these Oktoberfest tents is that each one is taken completely down and stored away until the next year.  After Oktoberfest is done for the year the dismantling of the tents and every other structure at the Oktoberfest begins. The tents are packed away and stored in warehouses 90 miles west of Munich in Augsburg. The Oktoberfest grounds become just a very large empty lot ,nothing remains except the paved streets. But, in July of the next year it all begins again. Rebuilding the tents begins for another Oktoberfest. The world's largest festival.
Posted by Sandy and Jeff at Monday, October 10, 2011