We spent last weekend in the Stuttgart area. We’d been invited to join a group of people on Sunday at the city’s Frühlingsfest (Spring festival). Rather than drive down for just the festival Jeff and I decided to leave Saturday morning to go the Porsche Museum located in Zuffenhausen, a northwest suburb of Stuttgart, and then visit Burg Hohenzollern about a half hour south of the city that same afternoon.

We left our house early to make the two hour drive so that we could be at the Porsche Museum when it opened at 0900. That proved to be a good idea since we were able to leisurely stroll through the museum in mostly quiet isolation but by the time we left at 1100 the place was packed.

Porsche was founded by Ferdinand Porsche, an innovative Austrian engineer in 1931. His impact on the automobile industry is significant having invented the electric hub motor, which was the very first hybrid gasoline-electric engine, a line of Mercedes-Benz cars and in 1934 he received a contract from Adolph Hitler to build a people’s car which would become the Volkswagen Beetle. Although Ferdinand Porsche became an engineer officer in the Nazi party he rarely wore his uniform. During WW II he was instrumental in tank development and the transition of his Volkswagen works to wartime use. He was jailed for 20 months in a French prison after the war while his son, Ferry, directed the Porsche company and began the development of the distinctive Porsche lines that would first be seen in the 356. That 356 shape would evolve into the 911 and its numerous versions and much, much more, turning Porsche into a name that’s synonymous with quality, speed and expensive.

The Porsche Museum is in the middle of the company’s production, design and manufacturing center. Although its address is Porscheplatz 1, from the A81 autobahn you drive down Schwieberdinger Straße which is a pretty funny thing to hear the GPS say as it repeatedly tells you to turn onto that street. 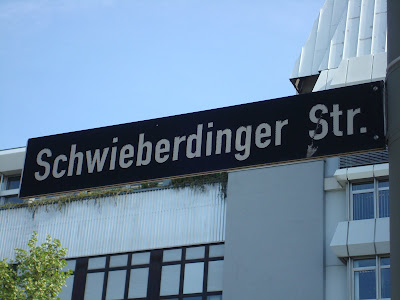 The Porsche Museum is a beautiful, modern, glass building. Entry is only 8 Euro with another 2 Euro for the audio tour. They do a factory tour that also starts from here. They do those Monday through Thursday, it's free but it's booked through November. 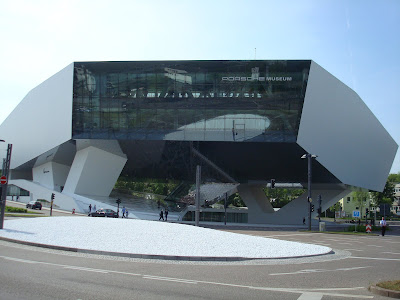 The Porsche Museum is a big, wide open place, very well laid out. With a great audio tour that follows Porsche from its beginnings, even before the war, to its first production Porsche vehicle built after the war, all the way to today and its most recent addition to the Porsche line, the Panamera. 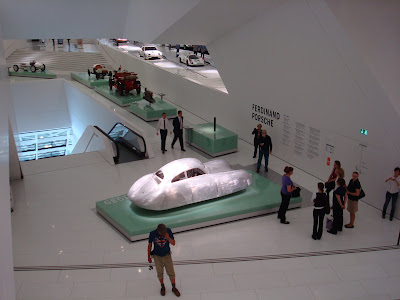 A lot of people are not aware that Ferdinand Porsche, the founder of Porsche automobiles, was also the developer of the Volkswagen Beetle, the people’s car. Interestingly, Porsche and Wolkswagen are merging into a single autombile entity this year. 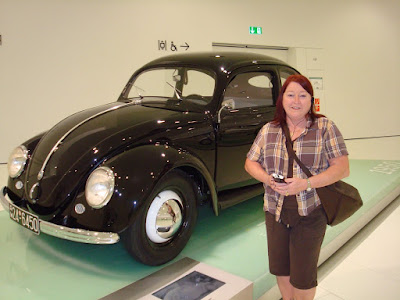 In 1948, after Ferdinand Porsche’s release from a French prison the previous year, he and his son, Ferry, built the 49, all completely by hand, of their new innovatively shaped 356 Coupe. The lines of this car would become the signature of Porsche automobiles; even today. 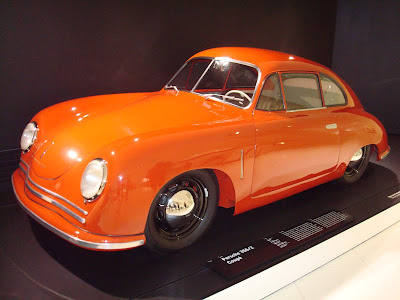 Inspired by the 356 the American Roadster was built specifically for the U.S. market. One of Ferdinand Porsche’s specification was that his sports cars must be able to hold within its trunk two small bags and a set of golf clubs. (Certainly not the massive set of clubs you see today.) The American Roadster was not sold in Europe except to U.S. servicemen. It became a favorite of American fighter pilots stationed in Europe and highly desired by European Porsche lovers. In 1955, this was the type of car that James Dean was killed in. 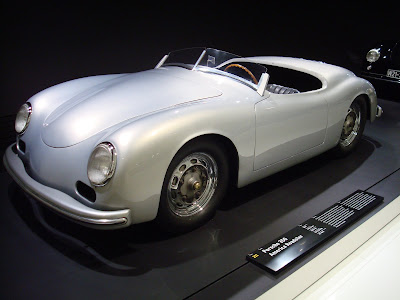 The 356 Carrera originally sold for around $4000. Today they sell at auction for about $300,000. The Carrera name comes from Porsche’s victories at the Mexican races at Carrera Panamericana. 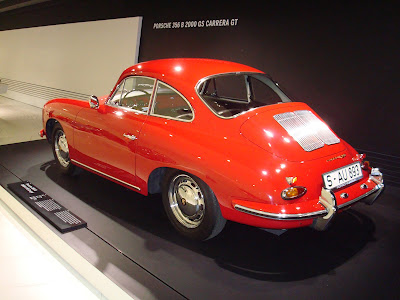 The 911 was first introduced in 1963 and versions of it are still built today. Originally, Porsche planned to designate the car as the 901. However, the French car manufacturer Peugeot had exclusive rights to name cars in France by three numbers with zero being the middle. Rather than name to car something else in France, Porsche just changed the designation to 911. 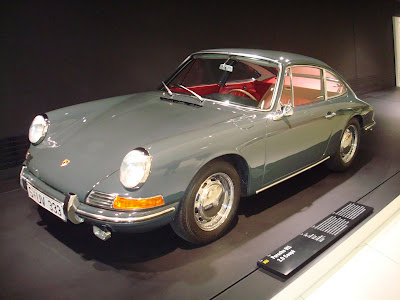 The Porsche 911 Carrera was introduced in 1973. It had a bigger engine, more horsepower, wider wheels and fenders and the distinctive “ducktail” rear spoiler. This car also has what would be the 911 Carrera characteristic Fuchs wheels. 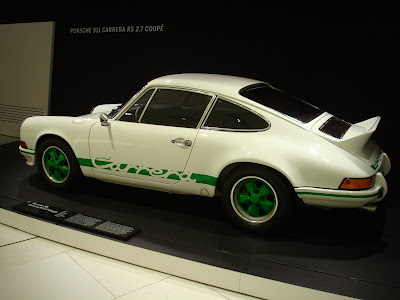 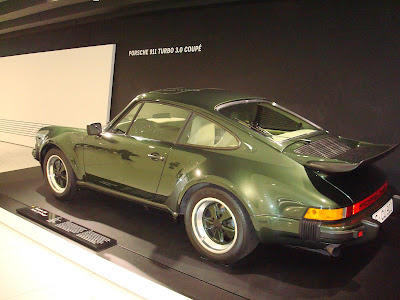 This picture is no joke. During our last assignment here in Germany we say Porsche 911 police cars more than once. 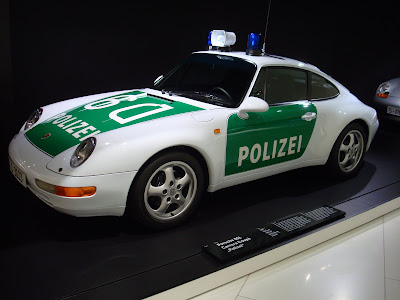 Danger!! Danger!! Not surprisingly, there’s a large Porsche dealership across the street from the museum. Jeff and I owned a Porsche 928S which we purchased in Germany in 1984 and brought back to the states. We kept it until 1995. I’m getting the feeling that the fire may be rekindled after this visit. 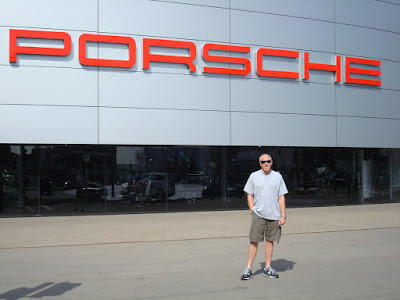 Walking back to our parked car, back in the world of drab, everyday cars, we saw this Smart Car parked smartly. Kind of makes you want to go push it over. 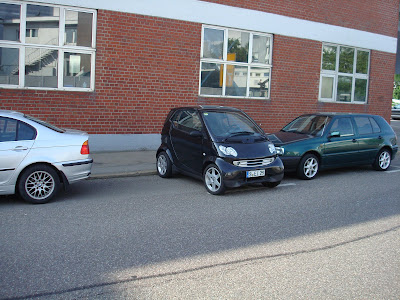 Who knows, this could be the most expensive visit of our time here in Germany. That's yet to be seen. We usually get something from wherever we go, even if it's just something very small that can go in our printers box on the wall. We didn't get anything Porsche . . . yet.
Posted by Sandy and Jeff at Tuesday, May 10, 2011