Until a couple weeks ago are experiencing an annoying phenomenon here in west central Germany. I’m not sure how widespread it was but we drove two hours north to Cologne and they were having the same issue there. It’s what I call Deutschland Dust. This had been going on for over a month. Wash your car and within minutes a light dusting of yellow pollen would settle on the newly clean surface. Overnight it would develop into a serious yellow layer of dust and after a few days your car would look like it came out of a yellow dust storm. I’ve never seen this problem before here and neither have most people I’ve talked to.

This is not our car. Jeff would never allow our cars to look like this. This is in my parking lot at Landstuhl. Most of the cars are covered with this dust. 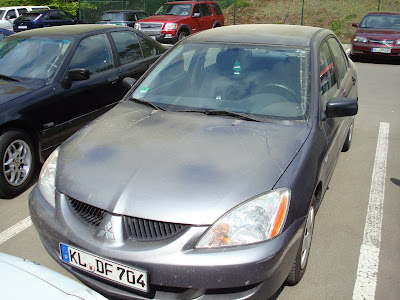 The cause appeared to be the result of two issues. I think most of this yellow pollen was coming from the rapeseed fields that are now a prominent crop here in Germany. The big yellow rapeseed fields really are pretty and a nice contrast to the various other green crops, pastures and woodlands. Rapeseed, or rape, is used for vegetable oil; in fact, it’s the source of canola seeds and canola oil. It’s also the preferred source of oil for the production of biodiesel, a huge initiative across Europe. Apparently, it’s a very profitable crop because these fields are so much more widespread across the German countryside than years ago.

A rapeseed field outside of Weilerbach. 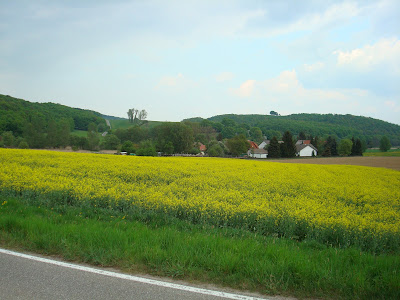 What was probably exacerbating the volume of airborne pollen from the rape fields was the fact that we’d had very little precipitation here in central Europe, along with higher temperatures than normal. Without that rain the pollen wasn't knocked to the ground and allowed to float about and settle on any outside surface; cars, lawn furniture, windows, anything. Doesn’t matter if you were in the country or in the city, this Deutschland Dust was everywhere. Luckily, it was more of an annoyance than a real crisis. Of course, that's all speculation on my part.

Since I’m talking rapeseed, I thought I’d share something else with you that I found interesting about rapeseed. Last fall after all the crops were harvested and fields prepared for the winter we noticed that most of the farmer’s fields had been planted with some type of something. I’m certainly not a farmer and know nothing about the farming business. So, when these whatever plants sprouted up and grew to 3-4 inches and stopped we figured that the farmers had just planted some kind of ground cover to reduce erosion. Through the winter all these fields had a nice green covering, some with a grass type cover and others a broadleaf cover. Well, when spring arrived, at least four months after these covering crops had been planted, with the warmer temperatures and additional sun light, these grass and broadleaf plants started growing again. Jeff and I were quite surprised. The grass plants are growing to be, we think, wheat but it could be some other type of grain too. The broadleaf plants have grown to be rapeseed. So that’s the interesting part, these crops sprouted then lay dormant for months, then kicked it back on when it got warm and sunny again. Like I said, I’m not a farmer. I'm sure this has been going on for centuries but it’s still pretty cool.

Here's what the rapeseed fields looked like all winter long. Just a short, broadleaf plant. Well, now we know. 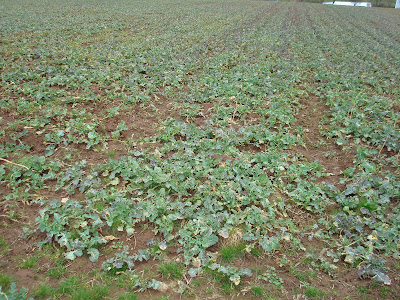