Judging beer is serious business, as you can see here. 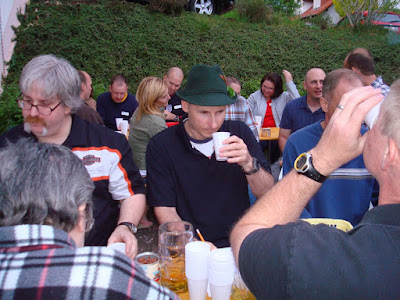 The tasting process we used was to provide each judge with 2 ounces of each beer, one at a time. Only Jeff and I, with help from two friends, knew which beer was being sampled. After all 13 beers were tasted each judge wrote down their top three favorite beers. For a first place vote we gave that beer three points, second place two and third place one. So the beer with the highest points was our world’s greatest. Here are the results.

Samuel Adams Boston Lager was selected as our world’s greatest beer. An interesting fact is that this is the sixth time we’ve done this beer sampling/judging event. Each and every time we’ve done this Samuel Adams Boston Lager has won. That’s really quite amazing. Of course, our process is not scientific and our judges are just regular beer lovers but after six times there’s got to be something to it.

You’ve certainly noticed one of the beers sampled was Old English 800. If you’re not familiar with this particular beer it’s probably because you don’t normally drink your beer from a paper bag. Old English 800 is sold in clear quart bottles for about a $1.80. Why it’s sold here in the base shoppette, especially with a selection of over a dozen German beers right there, I have no idea. But OE 800 was our ringer beer which we always throw into each one of these beer judging events. You’ll notice that OE 800 got 7 points. That’s the result of two people selecting it as their number one beer and one person selecting it as her third best beer. Of course, we won’t publicly humiliate those individuals by singling them out here on the world wide web. Although it’s always fun to see someone pick the cheap swill beer as their favorite of the bunch and then ridicule and belittle them. Here in Germany that’s called Schadenfreude; pleasure in the misery of others. Good grief, in the past, we had a good friend of ours pick Colt .45 as his number one and the only reason I point that out here is a bit more Schadenfreude; you know who you are.

I certainly wouldn't want to embarrass the three folks that voted Old English 800 as one of their favorite beers by identifying them here, so I won't. 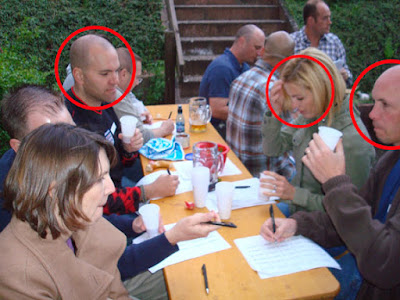 "What do you think Torch? This number six tastes like the best!" 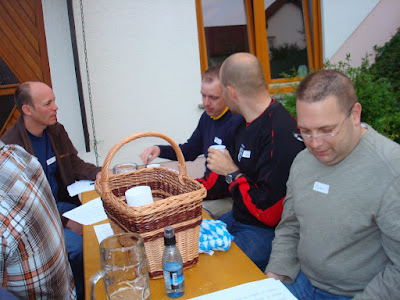 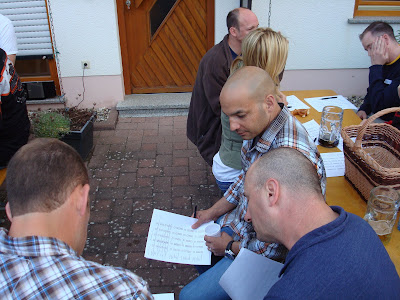 Crater explains how the beer feels so good when it touches his lips. Zero seems to agree. 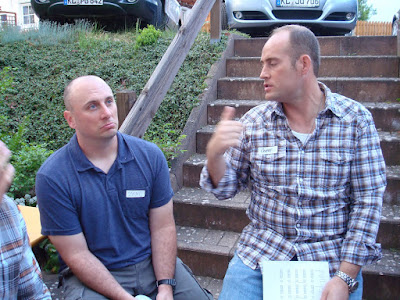 Jeff reading off the results of the beer judging and awarding prizes. 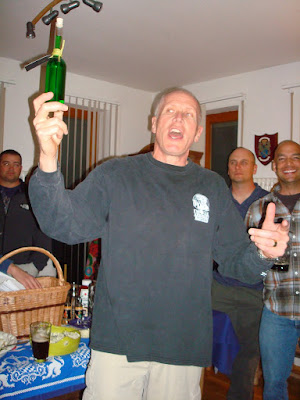 Party prizes. Left is 2-Balls with his bottle of absinthe for quessing the closest to the number of Neuschwanstein images there are in our house. Jeff, the Supreme Grand Poobah Bier Mester. On the right is Torch with his two-liter bottle of beer won for being the bier miester to most closely select the top three beers. 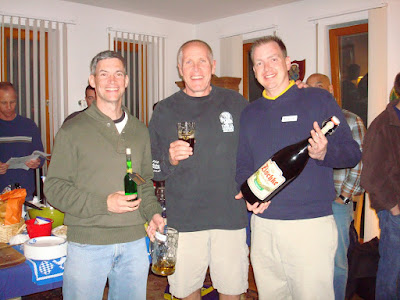 No matter how much fun the party is, you still gotta clean up. 17 judges times 13 beers equals 221 little plastic cups. 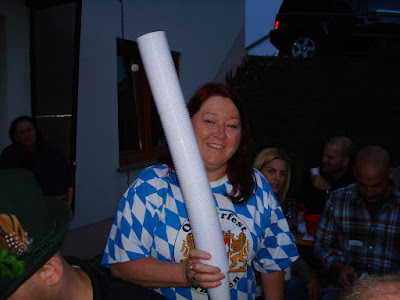