A-10 pilots who flew out of Bentwaters/Woodbridge and Alconbury will probably enjoy some of the pictures below.

It’s Day 4 in Bavaria and we’re going to begin our drive home shortly. On this last morning we woke up to the distinct smell of manure and the loud bellow of cows mooing. Looking out of the window of our hotel we saw the source of both. Right there in the middle of the village of Andechs, a cow barn just across the street. Kind of quaint in a smelly sort of way. 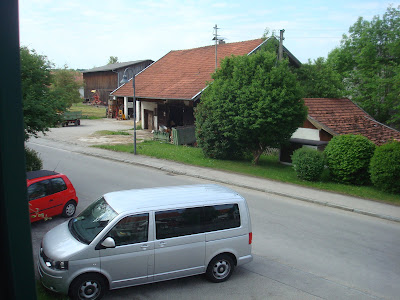 The main entrance to one of our favorite hotels in Germany, the Hotel zur Post Garni in Andechs. They do an amazing job here of taking care of people and decorating this very special hotel. 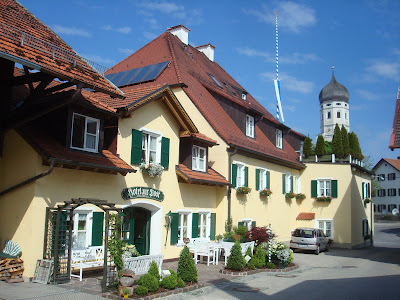 No smoking in doors in Bavaria but the folks at Hotel zur Post Garni make up this nice little smoking area for its customers.  Nice effort for a dirty habit. Anyway, we’re on our way home but we’ll be back in September for a one night stay before we drive into Munich for Oktoberfest. 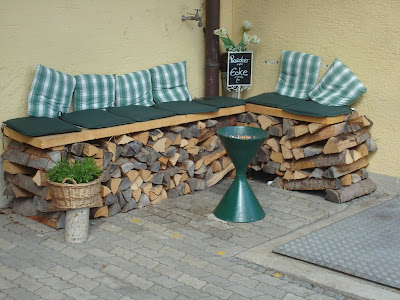 On the way home we decided to stop and see some of Jeff’s old A-10 stomping grounds at Leipheim, an old Luftwaffe air base. Just before reaching Leipheim we drove into Günzburg. Günzburg is well known for the Mengele farm implement manufacturing company outside town. If the Mengele name sounds familiar that’s because Günzburg is the hometown of the infamous Auschwitz “Angel of Death,” Dr. Joseph Mengele whose family owns the farm implement company. 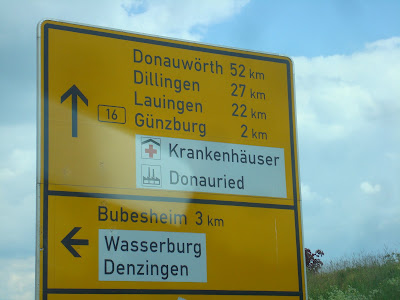 The city center in Günzburg where Jeff says he and his 511th buddies ate many a meal and drank many a beer. It’s closed to traffic now, a walk platz only. 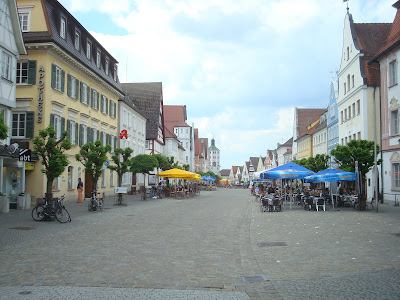 Hop back on the A-8 autobahn and we very quickly exit at Leipheim. 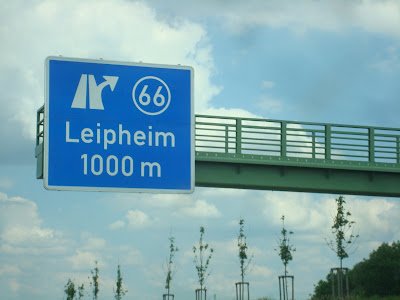 This may look familiar to a number of Bentwaters/Woodbridge A-10 pilots; the main road into Leipheim from the autobahn. Leipheim Air Base, for the most part, has been abandoned. Although there is some new industrial construction going on the base it is mostly a ghost town. You can drive right through the front gate and along the streets lined with World War II era buildings. 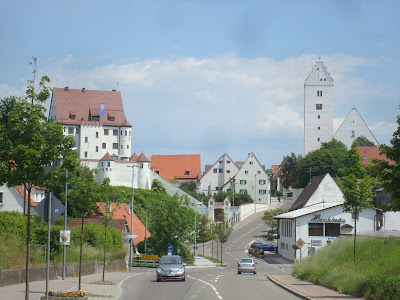 Back in the 80’s and early 90’s A-10 squadrons from Bentwaters/Woodbridge in the UK would send seven jets and 12 pilots to operate out of a forward operating location, FOL, in Germany.  Those trips were usually for two weeks at a time to become familiar with the terrain and weather in the event a war with Russian occurred here. Leipheim was one of four main FOL’s. This is the building where the A-10 pilots roomed during these short deployments. 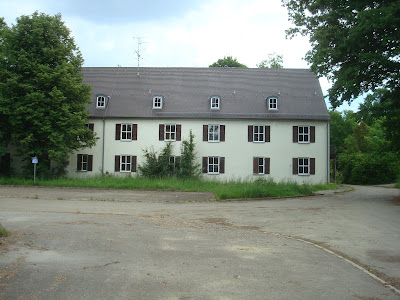 Just across the street from the billeting building is the Officer’s Club. This is the main entrance to The Club. Leipheim was a Me-262 jet fighter base during WW II. This is the same club where Germany fighter pilots ate and drank at the end of the day. Hermann Goering visited Leipheim and spoke to his airman from the balcony of the banquet hall in this building. Jeff and his squadron mates spent some great camaraderie filled nights in this place. 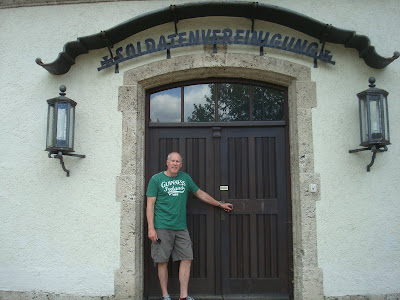 Here’s the main entrance again. To the left are these round windows with typical German, heavy metal grates over the windows. Notice the small, round white circles at the bottom of each. 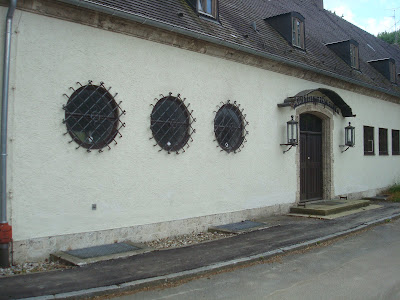 Upon closer look each one of these small round white circles was a sticker of one of the Bentwaters squadrons. This a 511th Tactical Fighter Squadron, the Vultures, Jeff’s squadron. There hasn’t been an A-10 squadron deployed to Leipheim in almost 20 years so these stickers have been here all those years, bleached by the sun and rain. 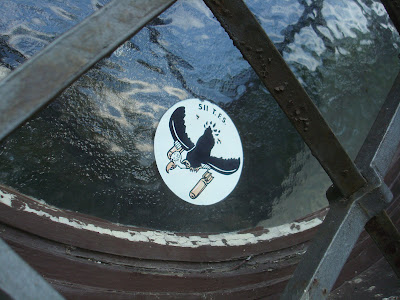 On another window is this 509th sticker. The Pirates were Jeff’s sister squadron and shared the same building back at Bentwaters. Both the 511th and the 509th moved to RAF Alconbury around 1988. They disbanded and closed down after Desert Storm. 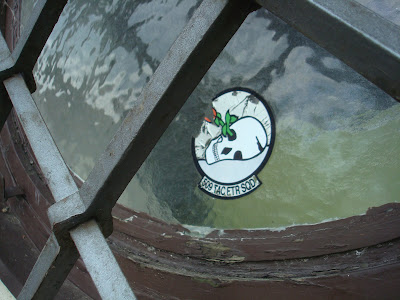 Behind the Officer’s Club is this statue of a naked maiden on the back of a bull. This was a common image used by the Nazi party before they began using the swatiska.  Although the allies destroyed swastikas wherever they were found, these statues mostly remained untouched. Other than the moss it’s still in pretty good condition. 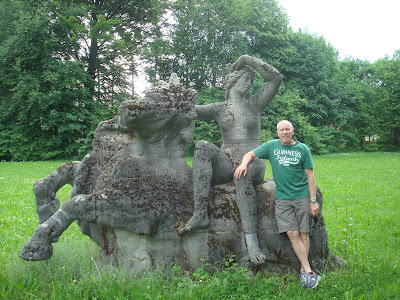 This is the billeting building again, taken from The Club. That door is the main entrance. 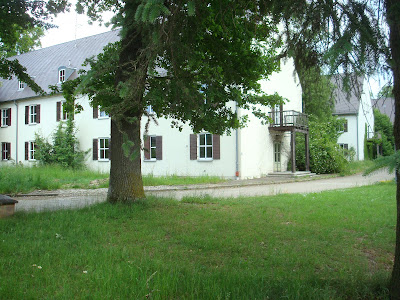 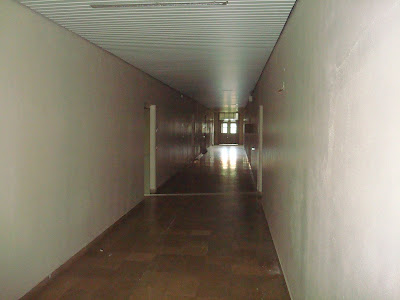 Billeting on the left, club on the right; that’s how close they are, stumbling distance. 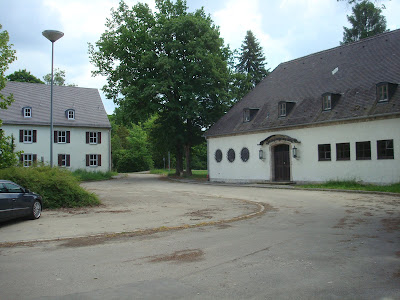 We drove around the runway, which wasn’t a simple task given the torn up roads, to where the A-10 operations building was located. This is the building from the taxiway. 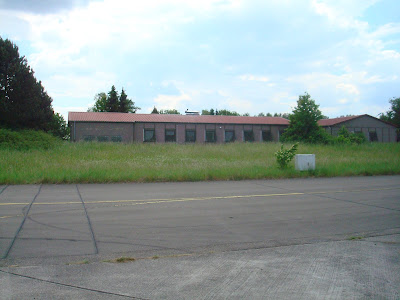 Entrance to the old A-10 operations building at Leipheim Air Base. 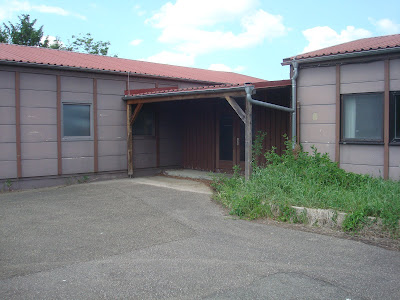 A couple of the hardened aircraft shelters at Leipheim. These nearly impenetrable shelters were built all across Europe during the cold war to protect fighter assets from an airfield attack. Although that fear is gone, there’s little that can be done to remove these structures because of their dense construction. 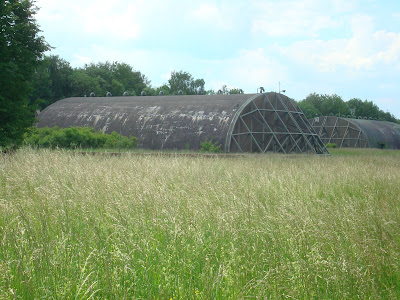 From the A-10 operations building you can see this clock tower in Günzburg. On an overhead pattern, here at Leipheim, Jeff says this was a landmark that was used to teach new A-10 pilots where to begin their turn to final. 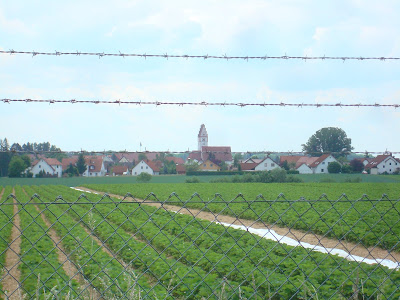 Back in the car, on the way home, we very quickly cross over the Donau (Danube) River. According to Jeff, there were many mornings at Leipheim when the fog formed over the Donau and then was blown over the base resulting in visibility too low for flying. 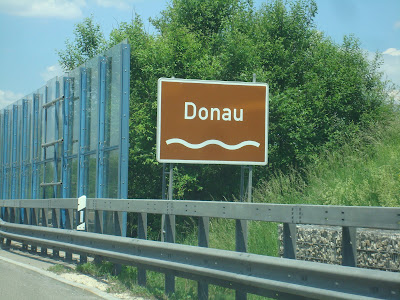 Well, that's our four days in Bavaria.  Hope you enjoyed it, we sure did. When most people think of Germany what they're thinking is Bavaria.  It's a special place with wonderful people, food and beer and probably our favorite place in Europe.  PROST!!