Back to the Deutsche Weinstraße (German Wine Road) last Saturday. This time we went to Kallstadt, a small town of 1200 people just north of Bad Durkheim, right on the Weinstraße. Kallstadt is a typical vineyard community with vintners lining the main street of the town. In addition to being known for its fine wines, Kallstadt is also famous for its saumagen, so much so that at least one of the town’s vintners uses that term on it’s wine labels, Kallstadter Saumagen.

You’re probably wondering what saumagen might be. Well, saumagen is a processed meat patty, very popular in this part of Germany that’s made from pig stomach and that’s exactly what saumagen translates to in English, pig stomach. Saumagen and mustard on a German roll; Jeff likes it, not me. 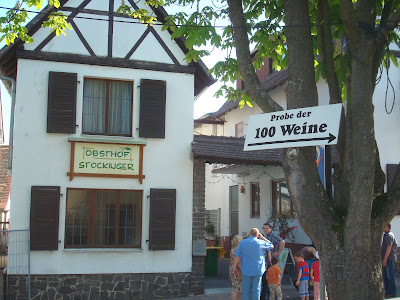 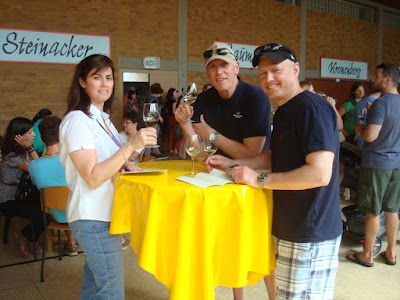 Kallstadt set up their 100 wines in the town’s gymnasium. They had four stations; each one served twenty-five of the 100 wines. The first station, 1-25, at the front of the picture below, served all red wines; Portugieser, Dornfelder, Spätburgunder and more.  You'll also notice that the red wine station isn't too busy.  Germany reds aren't that renowned.  The rest of the stations were all whites; Riesling, Weißburgunder, Silvaner, Scheurebe and other local favorites. 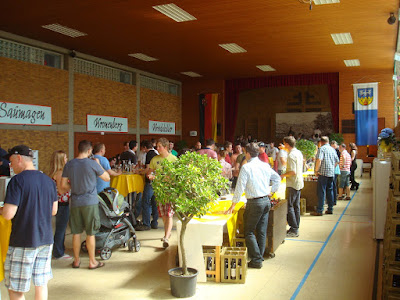 Here’s where we set up our wine probe operation. They provided us with nice pamphlets that listed all 100 wines that we could sample. Jeff said the first wine he was going to try was #69, whatever it was; turned out to be a Riesling Kabinett Trocken (dry). In the end we tried 20 of the 100 wines; 15 white, 5 red. 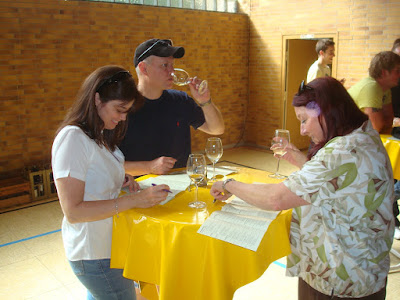 Like I’ve mentioned before, in Germany, if you throw a festival you gotta have at least one carnival ride and Kallstadt certainly did. Here’s me with one of them. 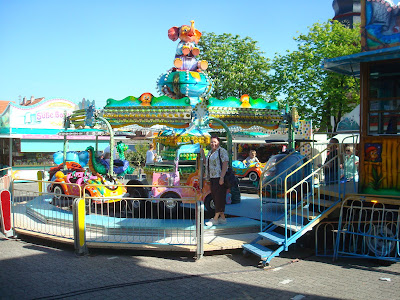 Anyone for some saumagen? Jeff had one, Tina and Keebs a bratwurst and I had a serving of pommes frites. 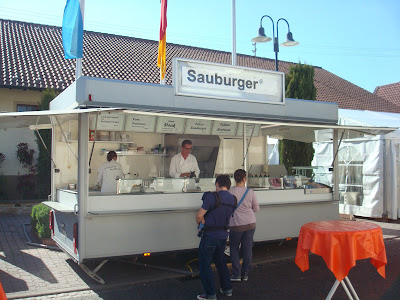 Here’s one of the little, cute tractors that they use in the vineyards and this one is towing an equally cute trailer of some sort. 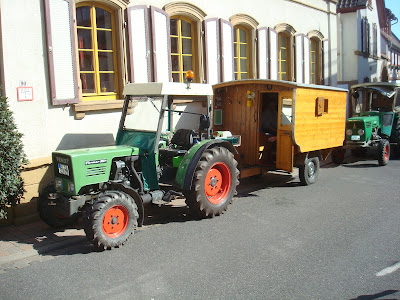 A closer look inside the cute trailer reveals a cozy bunk. Guess this must be for some late night vineyard work of some sort; nudge, nudge, say no more. 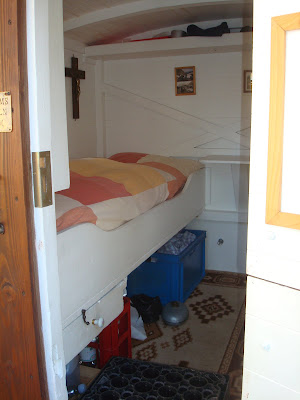 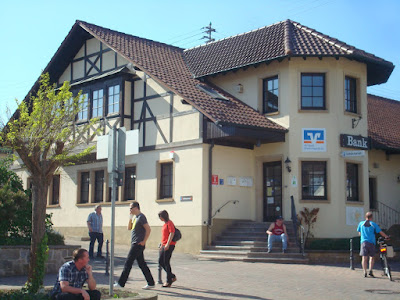 Standing on the Deutsche Weinstraße in Kallstadt. 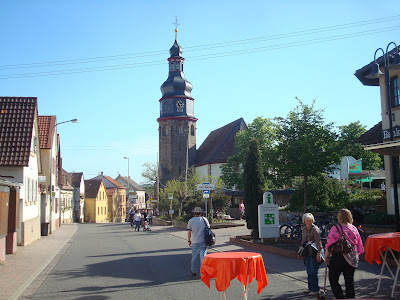 Well, we drove back to Kaiserslautern and stopped at our favorite beer garden, Bremerhof, for an evening meal.  Jeff had the Wildschweinbraten (marinated pork cutlet) with two Knodel (starchy dumplins) and German salad, I had two bratwurst, mash potatoes and saurkraut.  Bremerhof always delivers when it comes to food . . . and beer. 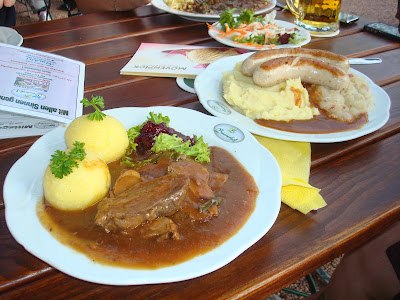 Nice, simple, fun wine festival. See how we're easing into the season. Half hour drive each way. Sample a few good wines, eat some good food, spend time with good friends, all makes for a good day. Ching-ching!!
Posted by Sandy and Jeff at Wednesday, May 02, 2012