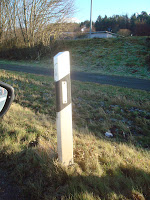 Along the highways in Germany, the autobahn and secondary roads, you’ll see these white and black posts. They're a plastic road edge marker and because they’re along all the main roads there are millions and millions of them throughout Germany. Americans have affectionately named them Macht Nichts (mokt nix) Sticks. Macht nichts means it doesn’t matter or it makes no difference. In reference to these posts, they’re macht nichts because if one is taken out or run over by a passing vehicle it’s no big deal, there’s another one just down the road. So, they’re macht nichts sticks.


Here's a little video with Jeff's explanation about the macht nichts sticks.

Jeff and I happened to find a dead macht nichts stick, just laying there on the edge of the road, back in December while Kelly was visiting.  We figured it'd be a great souvenir that would look good standing near our pool in Texas.  So we devised a clandestine operation to pick it up.  The plan required three people; one to drive, one to make the pickup and one to document the event. Here's a daring black ops, right here in central Germany.

The macht nichts stick weighs almost nothing, other than the metal foot that attaches the post to the base anchored in the ground, as mentioned, it's a hollow, plastic post. Now, the trickest part of any foreign abduction, getting it out of the country undetected.
Posted by Sandy and Jeff at Tuesday, February 14, 2012