O to O Be Ready for Snow

This is a common sight in Germany this time of year. 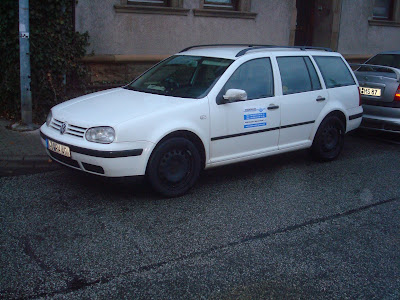 In fact, it's a common sight from October through March. What I'm talking about are the black wheels on this car which indicates that required winter tires are installed. In Germany, during the months when snow is possible, cars are required to have all-season or snow tires mounted on the vehicle. As mentioned, that time of year is October through March. To help them remember exactly when these tires are needed the Germans say they're required O to O; Oktober to Ostern (Easter).

If you're involved in a auto accident, October to March, and do not have the necessary tires on your car, even if the accident wasn't your fault, you get a ticket. German police set up random check points to take a look at the tires on the cars passing by. No winter or all-season tires, it's a ticket.

You'll see these black wheels on both inexpensive and expensive cars;  Mercedes, BMW, Audi. They can make a very nice car look cheap. Apparently people think it's just easier to have their winter tires already mounted on an inexpensive wheel and then just slap 'em on when needed.

You might ask, why don't they just always keep an all-season tire on their cars. I think it's all about the autobahn and wanting to go as fast as possible in the summer months.  This information is from our tire dealer.  Special summer tires are much harder rubber and wear better at higher speeds on the hot, summer autobahn pavement. A lot of folks drive with all season tires and you even see a number of folks that keep their black wheels and winter tires on their car all year.  But, both of these kinds of tires are softer and, although they're built to handle autobahn speeds, because of the summer temperatures and heat of the pavement they won't last as long as a specialized summer tire.

So there you have it.  Get those snow tires on!! Although we've only had about a 1/4" of snow this year and it's looking like we might not get much more than that.
Posted by Sandy and Jeff at Wednesday, January 11, 2012