We had a very nice, little family Christmas here in Weilerbach with Jeff, Kelly and I. We did all the traditional Christmas stuff, at least our traditions. Chili and cornbread Christmas eve, mimosa and sweet rolls Christmas morning. Had a nice Yuletide fire while we opened gifts and later watched our third Christmas movie; White Christmas. (Isn't iTunes great!) Big ham evening meal with all the fixins.

Kelly got me a Rüdesheimer Kaffee kit, complete with two cups, plates and spoons. So the next day, Boxing Day, Jeff made up a batch of Kaffees for Kelly and I. Here's a video of how that went. The ingredients are; sugar cubes, Asbach Uralt (cognac), fire, coffee, whipped cream, chocolate flakes.

Since it was boxing day we had to go down to the pubs. Since there's no English pubs here in the German heartland we found a nice substitute, an Irish pub. Here's me, Kelly and Jeff in full Guinness regalia at Thursty Nelly's in Kaiserslautern. Slàinte!! Good Craic!! 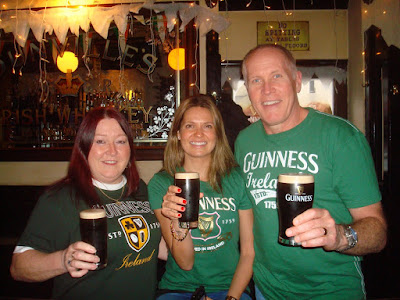