Half-liter beer bottles in Germany are pretty standard.  If it's not a porcelain pop-top then your beer of choice here will probably be in one of the bottles below.  Both are a half-liter.  The shorter bottle on the left, considered an old style bottle, is called a Bauarbeiterhalbe (construction worker's half liter). It got that name from the carpenters, construction workers and other labors that would arrive at work each day with a case of beer.  You don't see that anymore but 25 years ago it wasn't uncommon to pass by a building site where a new home was going up and see a case of beer sitting up in the rafters.  In those times, most of the cases were made up of the Bauarbeiterhalbe.  Since it doesn't often get hot in Germany and even slightly warm beer is not much of a concern here, there was no need to keep workman's beer on ice.  Of course, it's very possible that a case lasted two, three or four days. 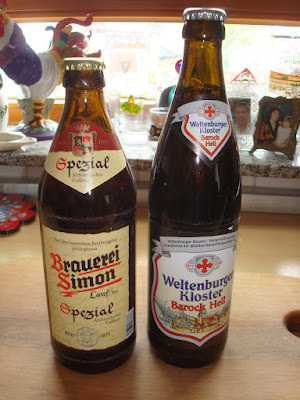 A few breweries still use the Bauarbeiterhalbe, even Augustiener in Munich.  However, 15-20 years ago the taller, slender bottle became more and more common until today it is definitely the most common beer bottle in Germany.  A few years ago Bitburger introduced a bottle design unique only to them but other than that there aren't many novelty bottles in Germany.

By the way, the beer on the left is a light, rauch (smoke) beer from Bamberg, just north of Nuremberg, in the northern part of Bavaria.  The slender bottle on the right is from the oldest monastery brewery in the world, Kloster Weltenburg located on the Danau (Danube) River just an hour north of Munich.

There you have it, beer bottles.  It's an important subject here in Germany.  PROST!!
Posted by Sandy and Jeff at Tuesday, January 08, 2013