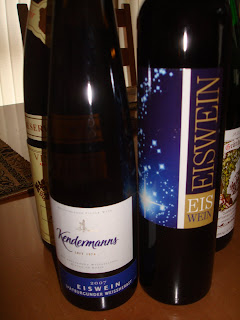 The time is approaching here in Germany for the Eiswein, Ice Wine, harvest. Eiswein is a sweet after-dinner or desert wine and what makes it special is the fact that it's produced from frozen grapes. Because, here in Germany, Eiswein can only be made from naturally frozen grapes it is risky business for wine makers.

These special grapes are hand-picked before sunrise at sub-zero, Celsius, temperatures because, to be called Eiswein in Germany, the grapes must freeze on the vine at temperatures at-or-below -7° Celsius. If temperatures are unusually warm, like this year, there may be no Eiswein harvest at all. If temperatures plummet quickly, and well below -7°C (19°F), the grapes will be frozen so hard that they cannot be pressed. Whether you're a believer in global warming or not, documented winter temperatures in Germany have been warmer recently. In the winters of 2007 and 2008 the freezing temperatures required occurred on only a couple nights, in 2006 none at all.

Temperature is not the only issue for wine growers with respect to Eiswein. Storms, rain, rot and wild animals can devastate a crop. Plastic nets are placed around vines to protect the grapes from heavy rain and scavengers. Bars of soap are hung among the vines to hide the scent of the grapes and even human hair clippings are scattered in the vineyard to hopefully scare off wild boars.

Eiswein grapes, which in Germany are mostly of the Riesling variety, once harvested are pressed while still frozen so that the water crystals in the grape's skin can be easily separated from the sugars and juices. This concentrates the flavor and results in the characteristic sweetness of Eisweins. 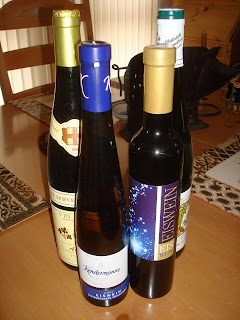 It's believed that Eiswein production was discovered by accident after a vintner attempted to salvage his crop after a hard freeze. Depending on the historian this happened either in 1794 or around 1840. In either case, because of the uncertainty of the process, until the mid-1960s Eiswein production was mostly for the personal use of the vintner. That's when Dr. Hans Georg Ambrosi began experimenting with Eiswein production techniques. He came up with the ideas of covering grapes with netting and recommended using low-lying areas of the vineyards where the needed freezing temperatures would most likely occur. With innovations like these Eiswein production became commercially viable.

Even with these advances Eiswein production is still risky. As a result, Eisweins are normally bottled in 375ml half-bottles which normally sell for 15 to 50 Euros. (To the left you can see the thinner, shorter Eiswein bottles, compared to a regulare wine bottle.) A wine grower that produces more than fifty thousand bottles of regular wine may only generate five hundred to a thousand half-bottles of Eiswein.

Aa mentioned, it's been quite warm so far this winter in Germany. There's only be a couple nights where temperatures have dropped below 0°C and nothing close to -7°C. So unless the temperatures drop in the next week or so, and the forecast is for more above average temperatures, there may not be much 2012 Eiswein.
Posted by Sandy and Jeff at Monday, December 12, 2011