This past weekend Jeff and I spent the night in Mainz to participate in some of the most magnificent Fasching festivities in all of Germany. Mainz is just an hour drive north of our home. The city is on the west side of the Rhine River, actually south side in this part of Germany where it flows east to west, across from Weisbaden. Mainz has a two thousand year history originally established by Roman legions. It had a central role in Charlemagne’s Holy Roman Empire and became a major Catholic church center of power north of the Alps. The city is the home of Johannes Gutenburg and where he developed the use of moveable type printing around 1455. Mainz was repeatedly occupied by the French and various German powers. It was heavily damaged during WW II. After the war it became the capital of the newly formed German state of Rhineland-Palatinate, the Pfalz, and today is the center of the state’s wine economy. But, as I mentioned, Mainz’s famous Fasching activities is what brought us to the city. 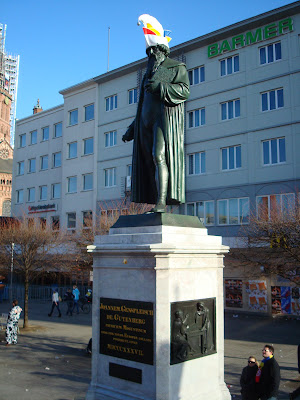 The reasons for Fasching are pretty much the same as Carnival in Brazil or Italy and Mardi Gras in New Orleans. But Fasching is much more wide spread around Germany. In some parts of Germany it’s called Fastnacht or Fasnet but either way it’s all about celebration. (Here on the right is Mainz's Gutenburg statue with his festival hat on. Ready to party!!)

In Germany, Fasching begins on the morning of 11 November at 11:11 and ends on Ash Wednesday, the beginning of Lent. Although there are big festivities on 11 November, with a break in the festival season for Advent and Christmas, not much really happens until the Thursday prior to Ash Wednesday. Parades happen through the weekend with the really big parade on Monday, Rosenmontag. In many places, “fools” take over the city government and “wild” woman run through the street kissing any man they choose and cutting off the neckties of others.

The most famous Fasching festivals take place in Cologne, Düsseldorf and Mainz but celebrations occur in big cities like Berlin to many small towns. Fasching festivities very early on developed as a way for Germans to display anti-French and anti-Prussian subversive statements during occupation periods through mockery and parody. Even today, government ridicule is a strong theme in Fasching parades. Carnival clubs build huge floats that are occupied by their members who, during the parades, throw out all types of snacks and children’s toys and, at the Mainz parade, greet the crowds with a large sweeping wave a loud yell of "HELAU!!"

The Mainz parade on Rosenmontag lasted four hours. There were thousands and thousands of participates and of the couple hundred thousand parade viewers, just about everyone had some type of festive costume on; folks dressed as cowboys, black and white striped prisoners, a herd of sheep, carrots, strawberries, Smurfs, cavemen, everything imaginable. So many of the bands, horsemen, and general marchers were dressed in magnificent old-style European military uniforms, complete with white wigs.

When you look at these pictures and videos realize that the temperatures were about 38-40 degrees F. Pretty chilly. But most Germans seemed totally oblivious to the cold. Lots of folks had short, thin costumes; some guys no shirt at all. Jeff and I were bundled up but the cold seemed to be no factor to this Fasching crowd.

At this stage there was band afer band, all full of energy. That certainly helped because the temperatures were around 40 degrees. Germans love their bands and they love to participate with the band and sing along to the music. One thing that was interesting, if you go to Oktoberfest in Munich, or any of the other big beer festivals around Germany, over half the songs you hear played are sung in English. Here, in Mainz, during Fasching, none.

At festivals like these Germans have no fear of making fools of themselves. These guys did a pretty good job at that. You can probably guess from their attire that eventually the jackets and pants came off.

I love these big head clowns. 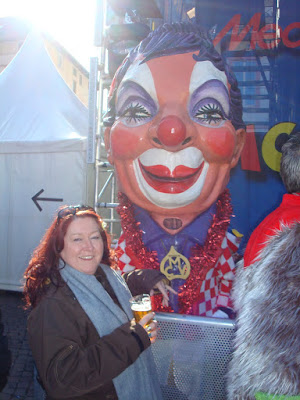 Here's part of the social commentary that is involved in these events. This float will be in the parade on Monday. It shows the Pope with blown up condoms on a stick. Remember the current Pope, Benedict XVI, is German and recently made comments saying it was OK for gays to use condoms to prevent spread of disease. I think this float is belittling those comments. 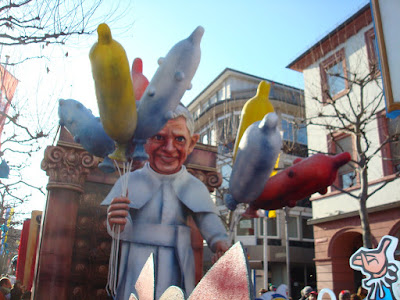 This is another float that will be in the parade on Monday. Not sure what the message is here. 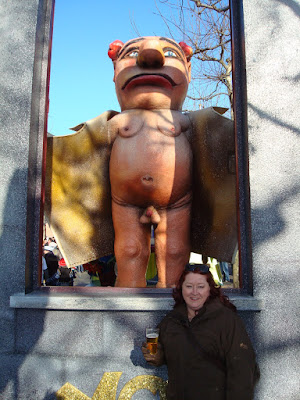 Almost every German at this Faschining celebration had on some sort of costume; really everything imaginable. These four guys with Jeff were dressed up as an airline crew. Jeff told the guy dressed like a flight attendant that he was prettier than most American flight attendants. 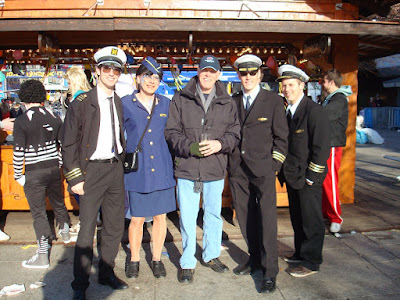 Hey, let's dress up as a herd of sheep. 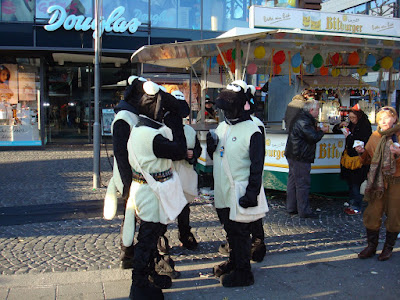 A gaggle of witches waiting for the parade to start. Germans like to dress up as witches, trolls, goblins and other scary stuff. 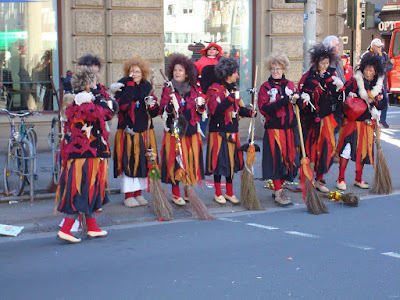 In this video you can hear the loud "HELAU" yell and see the big sweeping wave to the crowd. The kids are yelling "HELAU" back to attract attention and try to get snacks and toys thrown their way.

These big head clowns are funny. 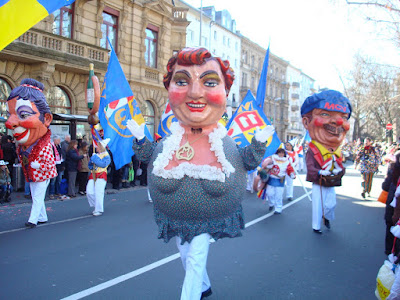 Here's one of those politically charged statements on a Fasching float. The scantily clad beauty here is Julia Klöckner, a very pretty politician here in Germany. She's portrayed here as one of the sirens on the Lorely rocks in the Rhine River that attract sailors to their doom. She's attracting some other local politician to a wreck on the rocks. 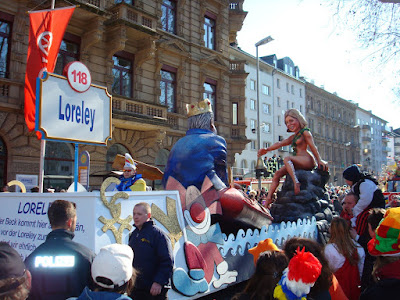 Germans do not mind looking like dorks when it's time to celebrate. In fact, the more dorks the more fun. This is one of the hundreds of bands in the parade. 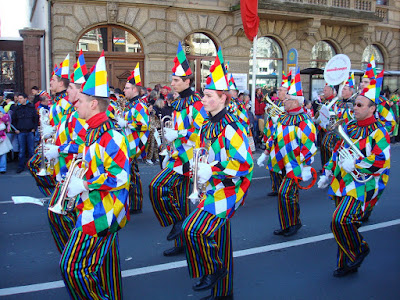 This video shows another band that's not afraid to look a little foolish. Their smurfs and really not very good smurfs. Some bands went with the dorky, fool look, others were trolls, hideous gargoyles and vampires.

A lot of the big floats were pulled by tractors but wanted to give the appearance of something more grand. So this carnival club went with fake horses. It would seem to be easier to just get some real horses than to make those fake ones. 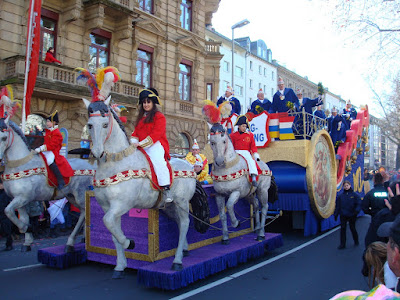 There were so many impressive uniforms in the parade. Here's a guidon barrier carrying the colors of a band. Impeccable uniform and that silver guidon just amazing. 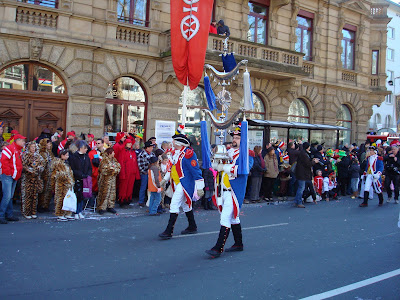 Now this carnival club got it right. If you're going to use horses, use real horses. 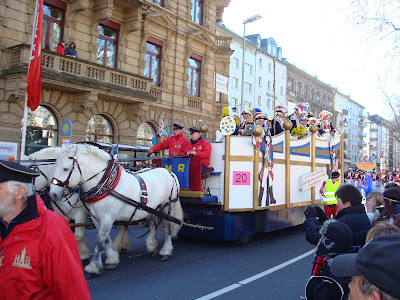 The sign above this little float says, "Red wine in blood, is good for our veterans." You can see a bag of blood hanging above each guy. Amazing uniforms. 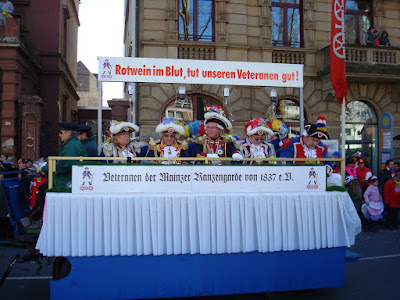 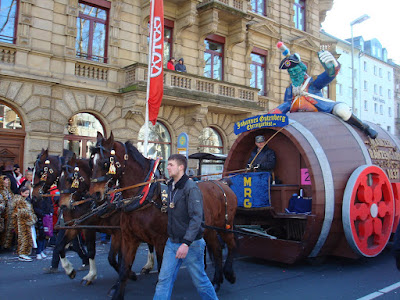 I can't get enough of these. 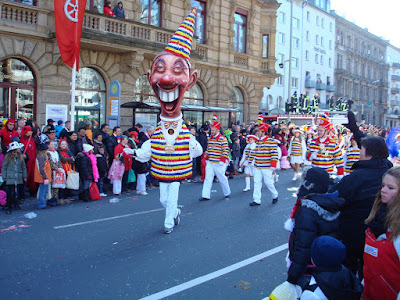 This is to give you an idea of how tall some of these floats were and so that you can see the cool Fasching hats that most carnival clubs wore. 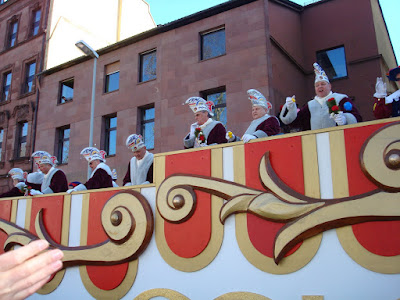 One last video of a big ass float. You can hear the "HELAU" again and this song, "Joanna," seemed to be one of the more popular songs during the parade. Here you can see what a nice job most carnival clubs did to cover the tractor pulling the float, making it part of the overall image.

Fasching is referred to as the "Fifth Season" here in Germany. I think it's kind of a celebration marking the end of the winter and the beginning of spring. And with the coming of spring all sorts of great times in Germany and across Europe are just around the corner.
Posted by Sandy and Jeff at Tuesday, March 08, 2011