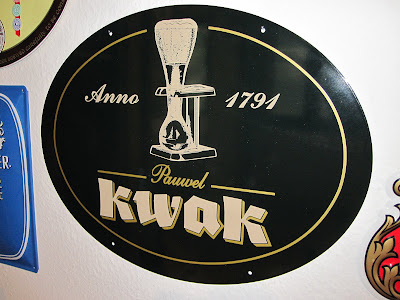 One of our friends visited Brussels recently and brought us back a Kwak kit. Kwak is a very good Belgium beer with an interesting glass and holder. Kwak is produced by the Bosteels Brewery in the little town of Buggenhout, Belgium, just north of Brussels.  They're the same folks that brew one of the very best Belgium beers of all, Tripel Karmeliet. Here’s what the Kwak kit looks like. 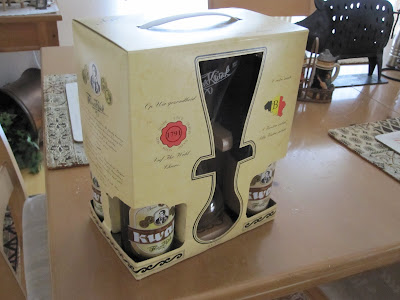 Inside the Kwak kit you get four bottles of Kwak plus the glass and holder. We’d figured the reasoning behind the glass and holder was that this configuration would mean a glass full of cold beer would never have to be touched by the human hand allowing the glass and beer to remain cold as long as possible. But, au contraire, that is not the case at all. Apparently during the 18th and 19th century carriages had circular holders that were meant to hold a walking cane or umbrella. The ingenious guys at Bosteels Brewery, who have been at this since 1791, came up with this glass design that would fit in the carriage holder, allowing someone to put down their beer without fear of it getting spilled.  At least that’s the story. Kwak and the glass were launched as a brand in the 1980’s. 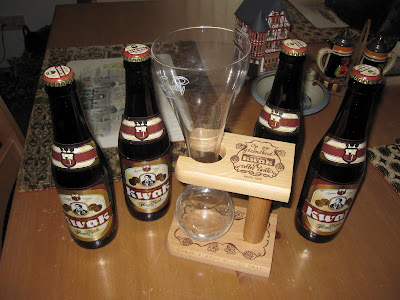 The Kwak kit in action.

There's always something new and wonderful when it comes to beer.  KWAK!!
Posted by Sandy and Jeff at Thursday, September 06, 2012