On the drive home from Cologne we stopped in Koblenz to see the Deutsches Eck (German Corner). The series of events that impacted this stop are quite interesting and subject for another blog. This one is about the Deutsches Eck, what it stands for and where it is.

The Deutsches Eck is a large statue of German Emperor William I mounted on a massive steed. Wilhelm I became the first emperor of the first-time unified German country after its defeat of France in 1871. Wilhelm died in 1888. Nine years later in 1897 he was honored with this enormous statue which sits on a point of land at the confluence of the Rhine and Mosel rivers.

Deutsches Eck, German Corner, at the confluence of the Mosel and Rhine Rivers. 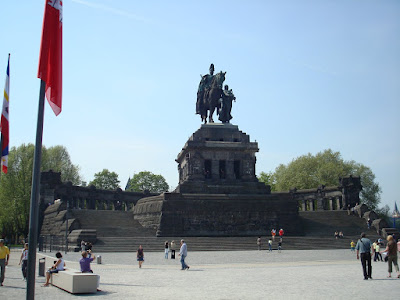 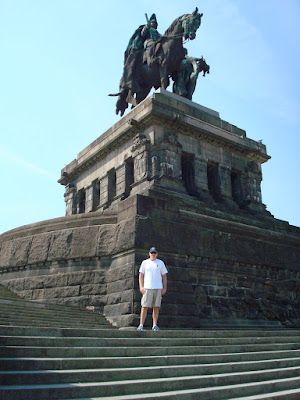 Before I go on, this raises another rhetorical question I have long had. When two rivers join, how do people decide which river continues on and which one ends? In this case, why couldn’t the Mosel continue and the Rhine end? Why couldn’t the Missouri or the Ohio continue and the Mississippi end? Speaking of the Ohio River, why do both the Alleghany and the Monongahela rivers create a confluence that results in the Ohio? Why doesn’t one end and the other continue?

OK, I’m done with that, back to the Deutsches Eck. It was damaged by U.S. artillery during WW II and the statue was taken down shortly after the end of the war. Because of various political issues, it would not be returned to its original pedestal until September 1993 when a Koblenz couple volunteered to pay for all reconstruction costs.

Jeff and I at the extreme point of land between the Mosel and Rhine. 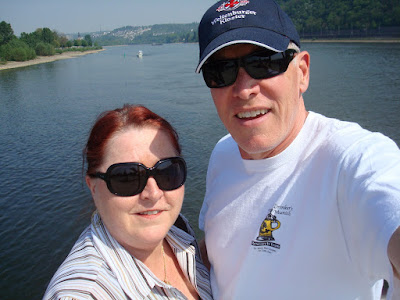 On the eastern shore of the Rhine, high on a bluff is the Ehrenbreistein (Broad Stone of Honor) Fortress. The present structure, with 20 foot thick walls, was built by Prussia in the early 19th Century. Today there’s an almost new, modern cable car system that will take people from the west side of the Rhine at the Deutsches Eck, across the river to the heights of the fortress.

Ehrenbreistein on the east side of the Rhine directly opposite the Deutsches Eck. 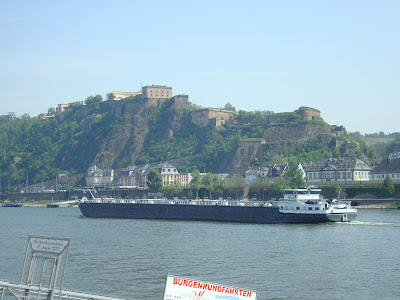 Deutsches Eck from Ehrenbreistein. The Mosel flows in from the top of the picture here which looks to the west. The Rhine flows here left to right, south to north. You can see the different colors of the river waters as they join. 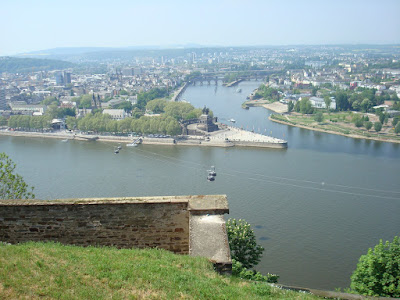 The grounds around the Deutsches Eck and Ehrenbreistein had been set up for a six month flower show. In fact, in the picture above you can see the cable car system across the Rhine which was built especially for this flower show. I'm here on the Ehrenbreistein grounds. They really had done a nice job and everything was very pretty. 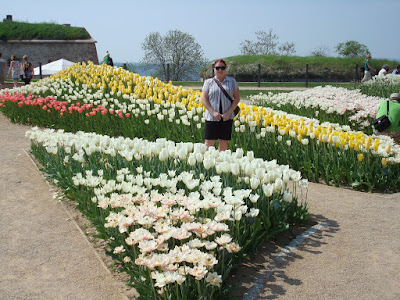 It was a beautiful sunny day to visit the German Corner and Ehrenbreistein Fortress. Comfortable beer gardens were situated in the shade along the Rhine. we knew it was going to be a perfect day for a drive south along the river and then home. Little did we know that our greatest challenge of the weekend was yet to come. But, as I already mentioned, that’s a subject for another blog.
Posted by Sandy and Jeff at Monday, April 25, 2011